Turkey's Syria Policy Could Lead to Its Own Destruction 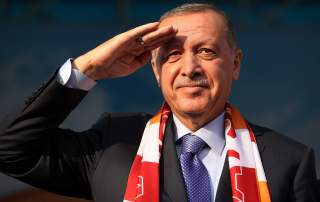 Turkish nationalists and supporters of President Recep Tayyip Erdoğan may cheer Turkey’s incursion into Syria and efforts to end Kurdish self-governance across Turkey’s southern border. Erdoğan may revel in nationalist fervor, but he fails to recognize that his cynical short-term strategy may have dire long-term consequences inside Turkey.

Erdoğan says his demand for a safe zone in Syria is rooted in Turkey’s war against terrorism. The Syrian Democratic Forces (SDF), Erdoğan says, is as much a threat as the Islamic State. That is of course nonsense: The SDF formed to fight Al Qaeda affiliates and the Islamic State at a time when Turkey was passively if not actively supporting them. Nor can Turkish officials credibly point to terrorist attacks from Kurdish-governed portions of Syria. Groups that evolved from the PKK are not monoliths: The SDF is progressive and moderate; any visit to the region makes clear that the group does not embrace the PKK’s Cold War-era Marxism. The PKK itself has long sought peace and does not attack civilians. The Kurdistan Freedom Hawks (TAK) splinter group continues to engage in terrorism, but they are based nowhere near Syria nor do they have any links to the SDF.

Erdoğan is frustrated that the international community does not share his appraisal of Syrian Kurds and, indeed, wishes to support them. Here, however, he has only his own precedent to blame: In 2006, after Hamas won Palestinian elections, Western and moderate Middle Eastern states agreed to boycott the group until they agreed to the fundamentals of the Oslo Accords: Foreswearing terrorism and accepting Israel’s right to exist. Erdoğan promised German Chancellor Angela Merkel that he would abide by international consensus, but then invited Hamas to Turkey where he gave them an enthusiastic and celebratory welcome. In the years since, Erdoğan has supported the group diplomatically—much to the consternation of the Palestinian Authority—and close proxies such as the IHH Humanitarian Relief Foundation and the SADAT paramilitary group—both support Hamas financially and materially. That Turkey supports Hamas despite its terror designation among both Western and many Arab countries undercuts any standing to complain about Western support of the SDF. Indeed, the biggest difference between Hamas and the SDF is that the former readily and openly embraces terrorism while the latter foreswears it and, indeed, has never targeted civilians.

Turkey’s demand for a safe zone inside Syria is another precedent that could haunt future generations of Turks. Erdoğan supporters say the threat posed by the PKK justifies the move, never mind that they cannot point to attacks emanating from the Kurdish self-governed areas, at least in recent years. If the past, however, is reason to impose buffers, what about the Armenians? Historical scholarship increasing concludes that the World War One-era slaughter of Armenians was deliberate. Much of eastern Turkey was acquired because of terror and ethnic cleansing perpetrated by Turks against Armenians. While some Turks may dismiss the notion of any equivalence of ongoing events in Syria and genocide against Armenians a century ago, and others may say any equivalence is irrelevant since Turkey is too strong to allow anyone to establish a buffer within its territory, this is historically blind: Syria once believed itself too strong to fail. Libya too. But authoritarian countries often become powder kegs, and extremist ideologies are sparks. Erdoğan may believe he can contain extremist proxies, but there is always blowback. Al Qaeda affiliates inside Syria and the Islamic State will eventually turn on Turkey. If any radical group stages cross-border attacks from Turkey into Armenia or Greece, Armenia, Greece and the international community would be right to demand a buffer inside what today is Turkish territory. And, just as Turkey demands the right to settle Arabs inside historically Kurdish areas of Turkey, Erdoğan is creating a precedent by which Armenians and Kurds can demand to settle their own populations inside Turkey. Indeed, Turkey’s 45-year occupation of Cyprus only adds weight to the idea that it is permissible to separate large chunks off countries to protect minorities or counter-terrorism. By Erdoğan’s own logic, for example, Cyprus would be right to demand a buffer to encompass the Turkish naval base at Gölcük and other southern ports from which Turkish forces send ships to loot offshore Cypriot resources.

Precedent matters in international affairs. Erdoğan may fancy himself a brilliant military tactician on par with Mustafa Kemal Atatürk, but while Atatürk built modern Turkey, Erdoğan’s ongoing actions could very well sow the seeds of its destruction.