How Far Did the Armenian Genocide Extend? A New Book Examines that Question. 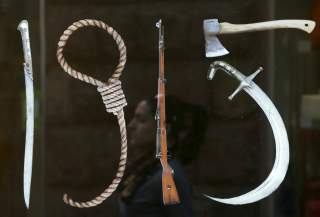 ON AUGUST 22, 1939, just ten days before his forces invaded Poland, Adolf Hitler instructed his generals, “our war aim does not consist in reaching certain lines, but in the physical destruction of the enemy.” He recounted his orders “to send to death mercilessly and without compassion, men women, and children of Polish derivation and language.” He concluded with the query, “who, after all, speaks today of the annihilation of the Armenians?”

Modern historians, and many others, including governments, legislatures, and, of course, Armenians themselves, today do indeed speak of what is now termed “the Armenian genocide.” Numerous authors have documented Turkish atrocities during the First World War, to which the term generally refers. Benny Morris and Dror Ze’evi, both professors at Israel’s Ben Gurion University, go much further in The Thirty-Year Genocide: Turkey’s Destruction of Its Christian Minorities, 1894–1924.

Morris and Ze’evi offer a history of the ethnic hatred in the Middle East that continues to be replayed to this very day. The players then are much the same as today: Turks, Kurds, Arabs, Christians, Yazidis and Jews. The authors’ work is filled with tales of the most horrifying brutality, though it focuses primarily on Muslim atrocities and on the virtual erasure of any Christian presence in Turkey.

Morris and Ze’evi argue that the Ottoman government, the Young Turks that effectively overthrew it in 1908 and maintained power throughout World War I, and the Nationalist government under Mustafa Kemal (later called Atatürk) that assumed power in 1921 all pursued a consistent policy of repression, and, indeed, planned extermination, of the three major Christian denominations—Armenians, Greeks and Assyrians—who made their homes and earned their livelihoods in territories under Turkish control. While the persecution and murder of as many as 1.5 million Armenians has received considerable attention over the past half century, that is not at all the case with respect to the other two ethnic groups, and to that extent the two authors provide an important contribution to the literature of the nineteenth- and early twentieth-century Middle East.

TO BUTTRESS their analysis, the authors draw upon a hoard of documents, with the notable exception of Turkish government files, which remain closed. Despite the absence of Turkish material, the story they tell is ghastly enough. Already in 1876, when Sultan Abdülhamid II attempted to crush the Bulgarian rebellion, William Ewart Gladstone, the four-time prime minister of Britain and no lover of the Ottomans, described the “Turkish race” as “the one great anti-human specimen of humanity. Wherever they went, a broad line of blood marked the track behind them.”

The Ottoman rulers had long turned a blind eye to persecution and exploitation of Armenians, whether they were rich or poor. This was especially so in eastern Anatolia, where hundreds of thousands of Armenians had lived for centuries. It was not only local Turkish officials who taxed and then re-taxed the Armenians, especially the Armenian peasantry. Nomadic Kurdish tribes constantly swooped down on Armenian villages, terrorizing the population with murder, robbery and rapine. Of course, the Kurds also taxed the Armenians, as did, to a lesser extent, the Circassians.

Kurdish and Circassian exploitation of the Armenians was at times openly supported by the government in Constantinople. When peasants failed to pay off their mounting debts, their properties were foreclosed and handed over to Kurds and Circassians “who, being Muslim, were considered more loyal to the state.” Moreover, the Kurds underwent a religious awakening in the 1870s, inspired by government-supported clerics. Their growing fanaticism justified, at least in their minds, their persecution of Christians—as if they really needed justification at all.

In 1877, the Russians, using the treatment of Bulgarians as a pretext, crossed into Ottoman territory, invaded eastern Anatolia, occupied eastern Thrace (home to thousands of Greek Orthodox Christians) and threatened Constantinople. When hostilities came to an end—thanks to pressure from Britain and Germany—the Ottomans lost much of the Balkans; the Bulgarians became an autonomous principality; and the Russians ensconced themselves in eastern Anatolia, home to hundreds of thousands of Armenians. Many Armenians wished the Russian presence to remain permanent. Indeed, Morris and Ze’evi note that the Armenian exilarch, the head of the Armenian Church, secretly asked the tsar “to hold on to parts of Armenia captured in the war.”

Not surprisingly, the Ottomans viewed the Armenians as a Russian fifth column, and redoubled their support of Kurdish and Circassian predations, as well as those of their Turkish officials and ordinary peasants. Armenian notables were imprisoned and tortured on flimsy allegations of rebellion. They would then be released upon the payment of huge ransoms—a practice that Christian rulers of Europe had liberally employed throughout the Middle Ages against Jewish leaders and their communities.

Exploitation gave way to outright massacres beginning in 1894 and continued for the next two years. Once again, it was primarily the Kurdish tribes, with government connivance, that carried out the beatings and the killings, committed brutal rapes, and carried off young women and children to convert them to Islam and treat them as slaves or concubines, and at times, marry them.

Though some Armenians resisted what at times was literally butchery, they committed their own atrocities as well. In one case, Armenian men and women from the town of Zeytun, upon hearing of massacres of Armenians elsewhere, “killed dozens of Turkish prisoners and burnt a handful of Muslim villages” before Turkish troops overwhelmed them. The Armenians tended to be poorly armed, primarily making use of ancient rifles and the like. But that did not stop the Zeytunlis, who continued to harass Turks whenever they had the opportunity, and murdered them “with hatchets, butchers’ knives and pickaxes.”

Stories of Armenian outrages, which at times were accurate but often exaggerated, and protests against the burdens of taxation only further angered the Ottomans. Protests and resistance meant flouting Sharia law, which relegated non-Muslims to, at best, dhimmi status. That the Armenians appealed to the European great powers for succor only intensified Ottoman anger. The result was yet more atrocities committed by Muslims of all stripes.

BY THE end of 1896, when most of the violence had subsided, thanks to Western pressure on the central government, more than 100,000 Armenians had been murdered. At least a similar number, and perhaps as many as 200,000, died “of causes related to the massacres.” Over six hundred churches and monasteries had been destroyed. Over three hundred churches had been converted into mosques. About five hundred villages had been forcefully converted to Islam. The worst was still to come.

The Armenians began to organize themselves in the 1890s, developing a truly national identity that clearly conflicted with Ottoman dominance. Moreover, there were groups that armed themselves and preached Armenian independence. However small these groups were, any resistance to Ottoman pressure, and certainly the killing of police or officials, begot even more violence on the part of both the government and the Muslim citizenry.

Western European pressure on the Ottomans may have led to an abatement of the massacres by the latter part of the 1890s, but Muslim hostility was rarely far from the surface. Rape, kidnapping, murder, and the burning and seizure of Christian, primarily Armenian, homes and lands never really ceased.

When the Committee of Union and Progress (CUP), better known as the “Young Turks,” seized power in 1908, it stressed the primacy of what it saw as the Turkish “race.” Morris and Ze’evi add that the CUP was in essence Islamist. Indeed, they assert that even if Islam was not in the forefront of their assault on Christians, it was always in the background, motivating even Turks who nominally were more “moderate” in religious matters.

The Young Turks, led by Mehmed Talat and Ismail Enver, initially pursued a policy similar to that of Abdülhamid—namely, “to de-Christianize the empire.” Morris and Ze’evi add, however, that

[w]hereas Abdülhamid used winks, nods, and informal allies among eastern Anatolia’s Muslim tribes to carry out his campaign of massacre, the CUP adopted a more systematic approach, issuing direct orders, overseeing the process, and tallying up the results with bureaucratic precision.

It employed its secret police, the Special Organization, to do its dirty work. This accelerated beginning in May 1915, when the mass murders of Armenians began in earnest.

Once Turkey entered World War I in October 1914, they faced a Russian invasion that included two battalions of Armenian volunteers. In the eyes of Constantinople, there could be no better proof that the Armenians were the enemy within. When Turkish forces suffered from setbacks on the battlefield, the government naturally blamed those outcomes on Armenian treachery—even if the Russians showed no mercy to captured Armenians serving in the Ottoman army. Having already been inclined to drive the Armenians out of all Turkish held territory, it did not take much for the CUP to unleash what Morris, Ze’evi and many others, including governments, identify as nothing less than genocide.