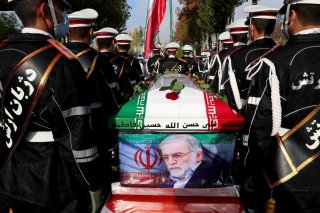 When asked to describe Iran, Saudi Arabia’s Prince Turki Al-Faisal told an interviewer that the Islamic Republic had “developed into a paper tiger with steel claws.” The former Saudi ambassador to Washington and head of General Intelligence Directorate for twenty-three years noted that by steel claws he meant Lebanon’s Hezbollah, the various militias operating in Iraq, and the Houthis in Yemen, groups that Tehran funded to do its dirty work throughout the Middle East.

But the prince may have been too generous. It seems that after forty-plus years of clenched fist revolutionary fervor, Islamic Republic officials are trying out for the role of the cruel but bumbling villain from central casting. Or is it that the curtain has fallen off, revealing a mean and not very competent wizard trying to manipulate the levers of make belief?

The year 2020 is turning out to be annus horribilis for the Islamic Republic but the rot had set in many years ago.

In 2018, a team of Israeli agents broke into a secret Iranian nuclear archive hidden in the village of Turquzabad and drove away with a truckload of files and maybe even radioactive samples. Bear in mind, the vast majority of Iranians had never heard of Turquzabad or could locate it on a map, until the breach was revealed by Israeli Prime Minister Benjamin Netanyahu. Yet Mossad agents managed not only to locate the site but smuggle troves of documents back to Israel.

Qassem Soleimani, the commander of Iran’s Islamic Revolutionary Guards Corps (IRGC) Quds Force, the elite expeditionary wing of the Revolutionary Guards, was killed by a U.S. drone strike after he landed in Baghdad. That security lapse happened in Iraq but the situation inside Iran is just as worrisome for the regime.

The assassination of Mohsen Fakhrizadeh, Iran’s top nuclear scientist, on his way to his villa in the town of Absard, outside Tehran, comes after a string of sabotage actions over the summer against some of Iran’s most sensitive nuclear sites including at the crown jewels of the Islamic Republic’s enrichment program at Natanz.

In August, Israeli teams on a motorcycle shot Al-Qaeda’s deputy leader Abdullah Ahmed Abdullah, who went by the nom de guerre Abu Muhammad al-Masri, in a posh street in Tehran. Although the news of the hit was leaked in November, the strike against al-Masri was ordered by the U.S. officials in retaliation for the deadly 1998 attacks on American embassies in Africa.

That killing suggests that Israel has multiple teams operating inside Iran with capabilities are beyond the intelligence unit of the IRGC, which seems to focus on dissident academics and dual nationals.  It is still not clear how Fakhrizadeh, a pioneer of the Islamic Republic's effort to clandestinely acquire a nuclear arsenal was so badly-protected by the IRGC, which is in charge of providing security for key officials.

Details of the assassination remain sketchy—one account claims five or six shooters, while a different account, “leaked” by a Revolutionary Guards documentary maker claimed twelve shooters plus a support team of around fifty people. Fars News, also affiliated with the IRGC, claimed the whole operation was conducted via remote-controlled automatic machine guns hidden inside a blue Nissan van which soon self-detonated.

No matter how it was done, the operation is a blow against the image of the Islamic Republic in the Middle East and beyond. After all, if Iran cannot protect its key assets, how can it provide security for its allies and militia leaders? Iran’s revolutionary credibility is under fire.

The Islamic Republic has used brute force to stay in power—from cracking down on protesters last November, in which the security forces killed more than 1,500 people, including dozens of children to assassinating opposition figures and dissidents. The assassination of Fakhrizadeh has cracked that edifice of a powerful state that had a monopoly on violence.

It must be terrifying for the weak and detached Islamic Republic leaders to know that Israeli agents operate without impunity across the length and breadth of Iran. Soon, even the steel claws may turn to paper.

Kambiz Foroohar is a writer and geopolitical analyst specializing on Iran. ​