Uncertainty in Yemen: Why Israel Should Support Southern Separatists 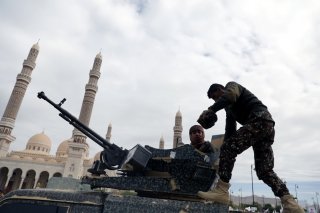 The trajectory of the war in Yemen is now highly uncertain due to a number of factors which include the upcoming change in U.S. administrations as well as the failure of the Saudi efforts over the past year to maintain internal cohesion within its coalition and reach a negotiated settlement with Houthis. The present uncertainty provides an impetus for Jerusalem to recalibrate its approach to the Yemen conflict, and it should consider shifting its policy to one which more actively supports the Southern Transitional Council (STC) in South Yemen.

While Israel is not a party to the war in Yemen, it does have interests in the arena: preventing the Iran-backed Houthis from growing more powerful and acquiring advanced weapons from Tehran, extricating Saudi Arabia (Israel’s unofficial partner in the regional anti-Iran coalition) from the costly quagmire, and preventing the resurgence of jihadist groups like al-Qaeda. The current state of affairs, in which Saudi Arabia leads a coalition supporting the central Government of Yemen (GOY) headed by President Hadi, advances only one of Israel’s three interests in the theater.

Based on the events over the past five years, the second half of which has been a stalemate between Saudi-backed forces and the Houthis, Hadi’s government appears unable to eliminate or even diminish the Iranian proxy threat. If anything, recent years have seen the pace, accuracy, and sophistication of Houthi attacks increase considerably.

In addition, despite Saudi Arabia’s best efforts, it appears unable to extricate itself from the conflict that has already cost it dearly in blood, treasure, and international reputation. This is because if Riyadh withdraws before a political settlement has been reached—and any deal seems like a remote possibility at present—then the GOY could collapse under Houthi pressure and leave Saudi Arabia without any channel of influence in what is often described as its “backyard.”

The one Israeli interest that has been advanced in Yemen is the decimation of Sunni jihadist groups, including al-Qaeda in the Arabian Peninsula (AQAP). However, this is hardly the handiwork of the Saudi-backed Hadi government. Rather, close cooperation between the United States, United Arab Emirates (UAE), and UAE-backed southern forces has led to the degradation of jihadists groups from their peak in 2015-2016 when AQAP took control of the Yemeni port city of Mukalla.

To ensure that its interests are protected in the face of potentially dramatic changes, particularly in Saudi policy, Israel should consider supporting Yemen’s STC in its ambitions to achieve independence for South Yemen. An independent South Yemen could safeguard Israel’s interests to a considerable degree: The STC and its UAE backers have already demonstrated willingness to take on jihadist forces, they are not dependent on Saudi support, and their rise could allow for Riyadh to end its costly involvement in Yemen. Geographically, they leave any future Iran-aligned Houthi state in north Yemen essentially encircled by hostile forces. The partition of Yemen would also deny the Houthis the fig leaf of legitimacy—a benign cover for malign activity—which would be granted to them in the event of a political settlement that maintained Yemen’s unity (a la Hezbollah).

However, it must also be acknowledged that Yemen’s STC will not resolve the Houthi threat. Given their southern separatist orientation, it is obvious why STC forces would be uninterested in conquering that very same northern Yemen territory from which they seek to secede. But in light of the fact that a unified and moderate Yemen is not a realistic possibility for the foreseeable future, partitioning the country may represent an optimal alternative between the extremes of unrealistic optimism regarding the prospects of the GOY and forsaking Yemen to the Houthis.

For Israel in particular, the rise of the STC could be a positive development given the organization’s apparent openness to Jews and the Jewish state. Two days after the UAE-Israel normalization agreement was announced, STC Vice President Hani Bin Brik declared his interest in visiting Tel Aviv, meeting with Jews from South Yemen, and then going together with them to Jerusalem to pray. Such public identification with Israel and Jews is quite rare in the Arab world and could mean that Israel has a potential ally conveniently located around Bab al-Mandeb—one of the most important maritime chokepoints in the world. In the Yemeni theater, all of the alternatives to the STC are far more hostile or at least standoffish in their approach to Israel.

At present, the STC is in control of Aden but it is not yet ready to govern the entirety of South Yemen because it lacks both the infrastructure to provide essential services and the adequate global support to delineate new international boundaries in rejection of those borders established when Yemen was unified in 1990. But it is worth remembering that there are no silver bullets or elegant solutions to this very messy conflict. Supporting the STC will not deliver a quick fix for Yemen because no such quick fix exists. Yet Israel might consider how it could support South Yemen’s aspirations as a means to ensure its interests in a strategic location at a time of great uncertainty.

Ari Heistein is a research fellow and chief of staff to the director at the Institute for National Security Studies (INSS) in Israel.