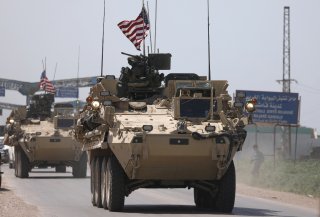 The U.S. military announced on Thursday that it had conducted two back-to-back raids inside Syria, killing two key surviving leaders of the Islamic State (ISIS) terror group and at least one other senior member.

The raids, announced by U.S. Central Command on Thursday, were conducted separately within the span of one day. On Wednesday night, a helicopter raid in Syria’s northern Kurdistan region killed Rakkan Wahid al-Shammri, an ISIS leader and smuggler who had reportedly participated in one of the group’s gruesome executions, and one of his associates. Several hours later, a second airstrike killed Abu Hashum al-Umawi, a deputy “wali” (provincial governor), and “another senior ISIS official associated with him” who was not named.

“This strike will degrade ISIS’s ability to destabilize the region and strike at our forces and partners,” U.S. Army Gen. Michael “Erik” Kurilla, CENTCOM’s commander, claimed in the press statement announcing the second strike. “Our forces remain in the region to ensure the enduring defeat of ISIS.”

Although the U.S. military’s actions in Iraq and Syria have scaled down following the territorial defeat of ISIS in 2019, American and other allied forces have continued to hunt the group’s high-level officials in hiding. In June 2022, U.S. forces killed Hani Ahmed al-Kurdi, a second wali and a prominent bombmaker for the group. Earlier in the year, a group of soldiers attacked the hideout of Abu Ibrahim al-Hashimi al-Qurayshi, the second “caliph” of ISIS, who ultimately detonated a suicide vest rather than face capture. Although that operation was successful, it resulted in the deaths of several civilians, including al-Qurayshi’s young children, prompting a debate about the military’s rules of engagement.

The press release announcing al-Shammri’s death claimed that no civilians or U.S. personnel had been harmed in the operations, and the second statement indicated that a “preliminary assessment” had come to the same conclusion.

ISIS first rose to prominence in 2014 after it captured vast swaths of Syria and Iraq, prompting the United States and other allied nations to aid Syrian and Iraqi forces in their fight against the group. By 2017, the group had been driven out of the major cities it had occupied; after its territorial defeat in 2019, it returned to waging a low-level insurgency on both sides of the border. An assessment conducted by the UN in February estimated that the group still has between 6,000 and 10,000 committed and active fighters between the two nations, and around $50 million in its war chest.