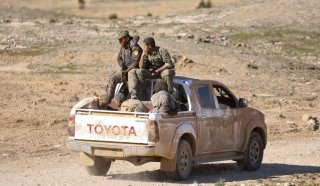 More than 120 people have been killed in Syria’s northeastern Kurdistan region after an attempted raid on the Ghwayran prison, a facility used to hold members of the Islamic State (ISIS), descended into a fierce gun battle between ISIS militants and local forces.

The Syrian Observatory for Human Rights, an organization that reports on the conflict in Syria, indicated that at least seventy-seven members of ISIS, thirty-nine Kurdish forces, and seven civilians had been killed in the attack. The coordinated attack began on Thursday and remains ongoing, although the threat of a mass escape appears to have been thwarted.

The terror group’s Amaq media outlet claimed responsibility for the attempted prison break. The channel released video footage showing ISIS fighters entering the prison and raising its infamous black flag. At the same time that external ISIS forces attacked the prison, ISIS detainees revolted, seizing parts of the complex and diverting some security forces from the defense of the exterior.

Dozens of prisoners were able to flee into the surrounding city of Al-Hasakah after a prison gate was damaged by a car bomb during the fighting. It is not known how many ISIS prisoners managed to escape during the attack.

The Syrian Democratic Forces (SDF), the Kurdish-led military forces of northeastern Syria, stated on Sunday that they received reinforcements and fully surrounded the prison, allowing them to thwart the breakout. The SDF also claimed that more than 100 inmates who escaped had been recaptured, although it did not offer an estimate of how many remained at large.

Mazloum Abadi, the SDF’s top commander, blamed ISIS sleeper cells for the attack, suggesting that ISIS had called up “most of its sleeper cells” within Kurdish territory to carry out the plot.

The attempted prison escape was the group’s most significant action in Syria since it lost its last sliver of territory in 2019. The terrorist group, which once controlled territory in Iraq and Syria equal to the size of Britain, reverted to low-level insurgency tactics following the loss.

Syrian and Iraqi prisons—which usually contain many young men with extremist sympathies—were ideal recruiting grounds for ISIS during its initial expansion, and breakouts were repeatedly used to bolster the group’s numbers. The SDF-run prison network in northeastern Syria is a lucrative target, as it imprisons roughly 12,000 known and suspected members of ISIS. Ghwayran, the largest prison in Kurdish territory, contained roughly 3,500 prisoners prior to the raid.