As U.S. Withdrawal from Afghanistan Concludes, Some U.S., Afghan Civilians Left Behind 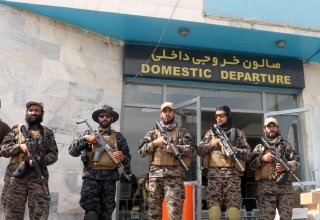 After the final U.S. flight departed from Hamid Karzai International Airport in Kabul on Monday at noon Afghanistan time, the final U.S. troops left the country, ending America’s twenty-year war in the country. The airlift, which evacuated more than 100,000 people over a period of two weeks, was unquestionably a significant achievement, and it likely saved the lives of many Afghans. Even so, thousands of Afghan civilians, some of whom were wanted by the Taliban, were left behind—as were several hundred Americans.

In his remarks after the final withdrawal, Secretary of State Antony Blinken emphasized that the United States would continue to rescue Americans and Afghans, working with the country’s neighbors to arrange for their exits via land or air.

However, the secretary conceded that without U.S. control over the airport, further evacuations would be difficult.

“We have no illusion that any of this will be easy, or rapid,” Blinken admitted, estimating that around one hundred U.S. citizens in the country wanted to leave but could not. He repeated that U.S. efforts to assist evacuees “holds no deadline.” For the time being, U.S. affairs in Afghanistan are being handled from the U.S. Embassy in Doha, Qatar.

In his remarks, Marine Gen. Frank McKenzie, commander of U.S. Central Command, informed the press that all U.S. citizens at the airport had been evacuated. According to McKenzie, the airport’s equipment was kept operable and able to evacuate arriving U.S. citizens until the last flight out.

The Taliban has agreed to continue allowing U.S. citizens to exit the country past the August 31 withdrawal date. However, it has not allowed Afghan citizens to emigrate and seek asylum in the West, a point of contention between the group and the United States. While the Taliban has declared a general amnesty for those who fought against it, many Afghans fear reprisal killings—a fear made more plausible after the Taliban secured personal data on thousands of Afghans who worked for the U.S. government during the American departure.

In a press conference, Zabihullah Mujahid, the Taliban’s most prominent spokesman, explained that the Taliban opposed further emigration because it feared human capital flight, as Afghanistan’s wealthiest and best-educated citizens left for the West. Human capital flight, more commonly known as “brain drain,” has been a significant problem for the country in the past.