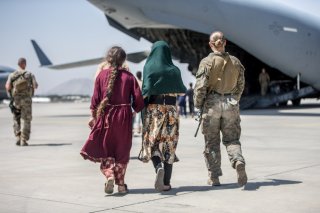 The Taliban announced on Tuesday that it would not allow any further evacuations of Afghan citizens from the country, warning the United States that it would not accept an extension of Washington’s withdrawal deadline by August 31.

In a press conference on Tuesday, Taliban spokesman Zabihullah Mujahid confirmed that, while foreign nationals would be allowed into the airport, Afghan citizens would not—and those already present within the airport should return to their homes.

Afghanistan is facing a critical brain drain, as wealthy and educated Afghans have attempted to flee the country as the Taliban consolidate their control. A large number of this group are women, fearing a return to Taliban rule as it was in the 1990s, in which women were not allowed to work, attend school, or leave their homes without a male relative present.

Mujahid has sought to downplay the group’s links to its past and has emphasized that the new government intends to be more moderate in its stances. He promised that wealthy and educated Afghans would remain free, urging that the nation’s elite “should not leave this country” and should return to work “in their own specialist areas.” As part of the Taliban’s amnesty, he continued, further violence would not be allowed, and Afghans who served the U.S. military and the Ghani administration would not be persecuted after the U.S. withdrawal.

Mujahid also indicated that the Taliban would continue to allow women to work and attend school, although there have already been reports from rural areas that women’s schools have been shut down.

While U.S. allies and some commentators have called for an extension of the withdrawal deadline beyond August 31, President Joe Biden has announced that the United States intends to conclude the evacuation by the deadline. On Monday, French Foreign Minister Jean-Yves Le Drian urged Biden to extend the withdrawal deadline, saying that all evacuations could not be completed by August 31 and warning of the consequences of leaving Afghans behind at the airport. Biden, however, has persisted, warning of the dangers of violence from the Taliban if the withdrawal agreement was not followed.

UK Prime Minister Boris Johnson objected to the Taliban’s condition that Afghans not be allowed to leave, stating at the G7 meeting that safe passage to the airport was the UK’s “number one condition.”