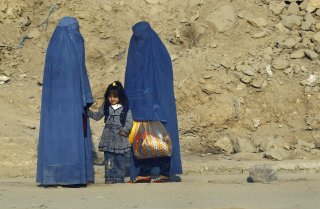 During the Taliban’s five-year dominion over Afghanistan from 1996 until 2001, the group was criticized around the world for its position on women’s rights. Girls’ schools were closed and women were forced to remain in their homes when the extremist group ruled the country. They were only allowed to leave in the company of a male relative.

The Taliban have not substantially changed their views over the past two decades. Prior to its re-conquest of the country in 2021, women in Taliban areas faced similar restrictions. However, in Kabul, Taliban leaders have publicly expressed moderation and willingness to accommodate a greater range of women’s roles. A Taliban official, Mawlawi Abdulhaq, agreed to be interviewed by Afghan TV presenter Beheshta Arghand. This was the first time that a woman had interviewed a member of the Taliban leadership within Afghanistan.

In fact, a group of Taliban officials led by the group’s spokesman, Zabihullah Mujahid, said during a forty-minute press conference attended by Western reporters that the Taliban would commit the newly-proclaimed “Islamic Emirate of Afghanistan” to a peaceful administration. Mujahid said that the country’s citizens who had worked for U.S. forces during their twenty-year presence in the country would be pardoned. Mujahid also claimed that the capital would remain safe for evacuations, terror groups would not be allowed to operate within the country, and that Afghanistan’s poppy fields, which supply 90 percent of the world’s heroin, would be eliminated.

These assurances have been met with skepticism from international observers, many of whom have observed that the group insisted on onerous restrictions on women within the territory it controlled during its twenty-year insurgency. Although Mujahid’s statements seemed to allow women education and employment, it was clear that he avoided making any firm commitments on the status of women. Mujahid also repeatedly included the caveat that women’s rights would exist “within the framework of Islamic law.” This law is open to considerable interpretation by the Taliban’s clerics, who have historically tended to view women’s rights through an extremely narrow lens.

On Tuesday afternoon, Khadija Amir, a different Afghan newscaster, announced that the Taliban had ordered her to stop working and replaced her with a man.