U.S. Withdrawal from Afghanistan Is No Reason to Leave Syria 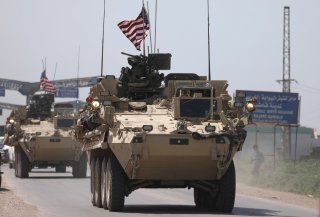 The Taliban’s swift advance in Afghanistan and its capture of the country following the U.S. withdrawal triggers questions about the U.S. presence, which started in 2016 following the international coalition operations against ISIS. The U.S. withdrawal from Afghanistan would encourage hesitant local and regional players such as the Syrian regime, supported by Iran and their rival (Turkey), to start asserting their ambitions of capturing the territories to the east of the Euphrates River, which is currently under the rule of the Syrian Democratic Forces (SDF) supported by a U.S. military presence. It would also revive the hopes of the crushed ISIS caliphate that a U.S. withdrawal from Syria is imminent, which would enable it to regroup and resurge again. The United States should be wary that its withdrawal from Afghanistan will encourage the aforementioned actors to destabilize eastern Syria in the hope of pushing the United States to withdraw from the country. If that occurs, they will swiftly fill the power vacuum.

The Syrian regime, supported by Iran, has continuously expressed its intention to retake areas currently under the control of SDF. These are strategic areas that have the country’s largest reserves of oil and gas. Retaking control of this area would soften the impact of the current sanctions on the Syrian regime and provide access to vital economic resources. Iran has been setting up and training tribal militias in eastern Syria in areas under the regime’s control, with the aim of preparing them to invade areas to the east of the Euphrates River should there be an American withdrawal from the region. It will not be surprising if Iran attempts to use its proxies to target American troops in eastern Syria in order to strengthen domestic opposition inside the United States regarding an American military presence in Syria.

Currently, Turkey believes that the SDF is a cover for the Kurdistan Workers’ Party (PKK), which Ankara labels a terrorist organization. Turkey, which led the formation of the National Army, a group of Syrian opposition forces, supported their military offensive against the SDF in Afrin in 2018. In 2019, Turkish president Recep Tayyip Erdoğan declared that his country was willing to invade eastern Syria to cleanse the country of terrorists. Considering Turkey’s strategic ambitions in the region and in the light of its desire to secure Kabul airport and establish a presence in Afghanistan, Turkey will be on the lookout for a new sphere of influence in eastern Syria and will make use of any opportunity to expand its presence there.

Lastly, ISIS’ failing caliphate project in Syria and Iraq will be cheering for what it considers the U.S. defeat in Afghanistan and will portray this to its followers and sympathizers as a crushing Western defeat. This withdrawal will most probably give hope to the remaining ISIS cells in Syria that the United States will eventually withdraw from Syria as well, which will give them the chance to re-establish their lost glory in the near future.

The United States has strategic interests in eastern Syria in terms of limiting Iran’s expansion in the region and protecting U.S. allies. The United States should not give the impression that its withdrawal from Afghanistan would be followed by a withdrawal from Syria. Fomenting skepticism regarding its military presence in Syria would only drive local and regional actors to create instability in eastern Syria with the aim of pushing U.S. forces out and expanding their influence in Syria.

Haian Dukhan is a Carnegie postdoctoral fellow of the Central European University and a fellow of the Centre for Syrian Studies at the University of St Andrews. He has taught politics and international relations at the universities of St Andrews, Leicester, and Edinburgh. His most recent book is State and Tribes In Syria: Informal Alliances And Conflict Patterns, published by Routledge