Is Washington Creating a Peshmerga Problem? 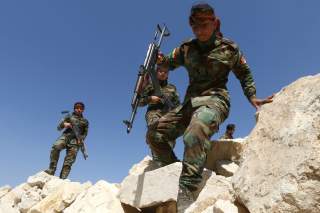 The road north from Erbil, the capital of the Kurdistan Regional Government in northern Iraq, is festooned with construction equipment for work on a large modernization project. Earthworks have been churned up, bridges are under construction, like the new multilane span across the Great Zab River. It is part of an artery for trade heading north to Dohuk and Turkey. The construction presents a contrast with the poorer farmers who line the road to sell tomatoes, tea and fish.

The contrast is symbolic of the autonomous Kurdistan region as a whole. In Erbil the pulsating nightlife and broad ring roads that swaddle the city present a picture of prosperity and stability in the new Iraq that has emerged after the war on the Islamic State. However, there are lingering problems such as disputes between Erbil and Baghdad over budgets and arms for the Kurdish security forces, called Peshmerga. There are vacuums between the defensive lines where the Peshmerga and Iraqi security forces are supposed to meet and where the Islamic State remnants have found small ungoverned spaces to exploit. Most of all, there is the strategic position of the region, politically closer to the United States and Ankara and wary of the rising power of Iran and Iranian-backed political and paramilitary groups that dominate parts of Iraq.

A multiday visit to the region revealed the hurdles the KRG faces two years after it held an independence referendum that was condemned by its neighbors and largely ignored or opposed by the international community. Under the new and younger leadership of President Nechirvan Barzani and Prime Minister Masrour Barzani, the region has focused less on the national dreams of independence and more on the pragmatic day-to-day issue of economic revival and working with Baghdad to secure the region’s demands under Iraq’s 2005 Constitution.

In mid-September Barzani met with the U.S. ambassador to Iraq, the speaker of Iraq’s Parliament, the president of the country, and other officials. India’s Minister of State for External Affairs arrived in Erbil on September 17 to unveil a statue of Mahatma Gandhi. On September 15 the deputy prime minister of the KRG, Qubad Talabani, met China’s consul-general in Iraq to discuss bilateral relations. This capped a month of similar important meetings and discussions, including a phone call between Barzani and Vice President Mike Pence in late August. During the meeting, Pence commended the region’s efforts at aiding the war on the Islamic State and hosting displaced civilians. The Kurdistan region is asserting itself on the international stage and attempting to show Baghdad how it is a key to stability in the country. “The people here suffered a great deal, we need to focus on reconstructing the country and looking to the future, a secure and brighter future cannot happen unless there is stability,” says Falah Mustafa, the senior policy advisor to the regional president.

While the region appears stable and its officials and Peshmerga generals often describe it as an island amid a region that is plagued by extremism and sectarianism, there are fears that  a combination of threats are a rising tide around the island. The Islamic State is reorganizing to the west, just an hour’s drive from Erbil. The Iraqi security forces are stretched thin and U.S. coalition advisors can only assist in encouraging the Peshmerga and Iraqi forces to work more closely together. The KRG is wary of the Shi’ite militias or Popular Mobilization Units (PMU) that man checkpoints across Nineveh plains down toward Kirkuk to the south, disputed areas that Baghdad wrested from Kurdish control in 2017. There is lasting anger in the KRG and feelings that the United States, a key partner, turned its back on Erbil and made it possible for the KRG’s enemies to use U.S.-supplied tanks and weapons that were meant to fight the Islamic State war against the Kurds. To normalize the situation, a security mechanism is needed and trust-building efforts are necessary, local officials say.

The role of Iran in Iraq is a sensitive issue in Erbil—one that comes up in almost every discussion. These discussions sometimes include simple complaints that Shi’ite religious groups are fanning the flames of incitement against the Kurds. For instance, scurrilous reports in Baghdad in late August suggested that there was an Israeli base in the Kurdish region, leading the authorities to issue a denial. This comes amid near-daily reports of suspicious air strikes on PMU positions across central and western Iraq. PMU members have blamed the United States and Israel for the numerous attacks that began in late July and often target PMU munitions. It has led PMU member Abu Mahdi al-Muhandis to suggest that the PMU needs an air force.  The Kurdish region views these comments as a dangerous development. Some in Erbil now believe the PMU is seeking to become an Iraqi version of the Iranian Islamic Revolutionary Guard Corps, a kind of parallel state with its own powerful army, economy and maybe even air power.

The rise of  the PMU, now an official paramilitary force in Iraq paid by Baghdad and once described by former Iraqi Prime Minister Haider Abadi as the “hope of the country and region,” leads to questions about why Baghdad is not paying Peshmerga salaries. Unlike the PMU, the Kurdish Peshmerga are part of the Iraqi Constitution. Negotiations for the budget have dragged on and despite promises from Baghdad the Peshmerga are systematically underfunded. A visit to their bases and frontlines reveals the reality, they often lack heavy weapons, uniform armored vehicles and the proper barracks and facilities for the men. During the war on the Islamic State, the coalition helped train the Peshmerga and equipped some brigades. Millions in funding from Washington is still supposed to be forthcoming. The Peshmerga want support to reform their units, and they desire anti-tank weapons, body armor, as well as anti-drone capabilities. But the concern is that support, if it ever arrives, will be too little and too late as Iran’s allies grow more powerful and through their power in the largely Sunni provinces liberated from the Islamic State a new conflict with extremists will emerge. One Peshmerga general has noted that his men have only received about two percent of the equipment and budget they should be receiving. “All of the rest of it ends up with Iraqi Security Forces and the PMU,” the general said.

Some of the tensions have been improved under Iraq’s prime minister Adil Abdul-Mahdi. But he lacks power and is not rooted in either the Fatah Alliance that is linked to the PMU or Muqtada al-Sadr’s party, which has the largest number of seats in Iraq’s parliament. Sadr recently showed up in Tehran for a ceremony on September 10 with Iran’s Supreme Leader Ayatollah Ali Khamenei and IRGC Quds Force commander Qassem Soleimani. The symbolism was not lost in Erbil. “It shows no matter how much Saudi Arabia  or others pay Sadr, he is in their [Iran’s] pocket,” said one official.

With a palatable and relatively benign prime minister in Baghdad, a rising Iran, sectarian paramilitaries on the border, and the Islamic State resurgence, the Kurdistan region looks to the United States for support. “Who do you have as a friend, ally and partner, with an open and welcoming society,” say those in Erbil. After many years working with Washington, Erbil wants a clearer statement or kind of “white paper” that expresses U.S. commitment and intentions. But there are simple hurdles that make the region more distant. For instance, in the absence of a visit by Baghdad’s leaders to Washington, the KRG’s leaders have been told that protocol means they cannot visit Washington. This means that America’s closest allies in Iraq are not being hosted in Washington. Additionally, U.S. tensions with Iran also tend to overshadow Baghdad, creating additional problems. For instance, President Donald Trump’s visit to Iraq in December 2018 was seen as  snub in Baghdad because he didn’t meet with any officials. And his comments about using Iraq to “watch” Iran ruffled feathers.

Erbil is facing a multitude of challenges. It wants to solve disputes with Baghdad over Kirkuk and Sinjar, as well as encourage more stability in Nineveh plains between Erbil and Mosul. The Minister of Transportation and Communication, Ano Jawhar Abdulmasih Abodka, is a member of the Christian minority. He has spoken with passion about the KRG’s role in sheltering Christians who fled the Islamic State and also in creating conditions for the community to thrive today. He has talked about the problems Christians face today in Nineveh due to sectarian paramilitaries. Abodka suggests that the United States could play a role here, especially given the current administration’s commitment to religious freedom. Yazidis who fled from areas occupied by the Islamic State are also still living in internally displaced person camps in the Kurdistan region, unable to return to Sinjar, which lacks security and investment.

The transportation minister says that there is an opportunity now to commit to the private sector and provide new options for transportation. The KRG have often been neglected, especially in the “brutal persecution” era of Saddam Hussein. Now, the bridges and new highway stretching north of Erbil to Dohuk and the Turkish border are examples of the future. But that future requires a budget from Baghdad.