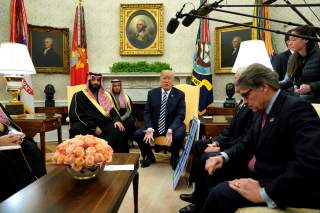 President Donald Trump doesn’t understand his chief responsibility as president. It is not to make deals and create jobs. It is to protect the security and liberty of Americans. By that standard, the Kingdom of Saudi Arabia is not a “truly spectacular ally,” as he claimed.

The president has had trouble confronting the obvious fact that Crown Prince Mohammed bin Salman, the KSA’s de facto ruler, is a brutal, even sadistic, murderer. Not by his own hands, of course, since MbS, as the crown prince is known, has plenty of minions available to do his bloody work. But it is no less cold and cruel to send a fifteen-man hit squad, including a medical specialist armed with a bone saw, and turn a consulate and consular residence into killing grounds. To use it against a man making mild criticisms of a system to which he once belonged and remained connected, was petty and vindictive.

Worse for Washington is the affront to the United States. America protects the corrupt, licentious, and oppressive Saudi royal family. Yet Riyadh did not hesitate to ostentatiously murder Jamal Khashoggi, who had taken refuge in the United States, a traditional sanctuary for dissidents from abroad. Americans had welcomed Khashoggi. A columnist for the Washington Post, he was well-known in the policy community; I had both broken bread with him and served on panels with him.

Moreover, President Trump knows, or at least he should know, that Saudi Arabia is a totalitarian hell-hole. Rated unfree by Freedom House, the Kingdom allows not even a hint of political or religious liberty. There is not one church, synagogue, or temple in the KSA. Iran is a beacon of religious toleration in comparison. Moreover, MbS has tightened political controls even as he has relaxed social strictures. A big spender on yachts and chalets, he launched a supposed crusade against corruption, which turned out to be a revenue-raising expedition targeting potential critics among Saudi Arabia’s elite.

Worse is the Kingdom’s international role. Historically the KSA has been a dangerous breeding ground for terrorists, providing fifteen of nineteen 9/11 hijackers. Saudi money also enriched Al Qaeda and other radical groups; the regime backed jihadists in Syria and through its invasion of Yemen freed up radical groups, including Al Qaeda in the Arabian Peninsula, thought to be the most effective Al Qaeda franchise. Only Al Qaeda’s foolish decision to target the royals—not the attack killing thousands of Americans—led to a KSA crackdown at home.

Riyadh’s brutal aggression against Yemen also created a humanitarian catastrophe and empowered Iran. Kidnapping Lebanon’s prime minister benefited Hezbollah. Attempting to isolate—and then threatening to attack—Qatar pushed the latter toward both Tehran and Ankara. In Syria Riyadh backed radical forces which came to dominate the opposition. As for Iran, U.S. interests would be best served by a balance of power, not hegemony as sought by MbS.

Rarely has an assassination been carried out as ostentatiously as that of Khashoggi. Even President Trump was forced to admit that the journalist was murdered, by a massive hit squad, in a brutal manner, by the Saudi government, in its diplomatic facilities. Moreover, the president publicly acknowledged the lies and attempted cover-up. Riyadh variously claimed that Khashoggi left the consulate, died in a fist fight inside the building, and was murdered by a gaggle of high-ranking Saudis acting without orders.

Nevertheless, the president has convinced himself that MbS, whose government kidnapped and imprisoned members of the royal family, was not involved in Khashoggi’s murder. And that appears to be based on the belief that KSA is a “truly spectacular ally,” by which President Trump means it buys U.S. weapons and other products.

Yet America’s chief executive is proving to be a pitiful negotiator. The KSA needs America far more than America needs the KSA.

So far the Saudis’ supposed $110 billion weapons buy has yielded little more than a tenth as much cash. In any case, the purpose of alliances should be to enhance U.S. security, not boost arms sales. Riyadh is going to continue purchasing American weapons for its own reasons, including security and prestige. Of course, it could diversify suppliers, but for logistical reasons the Kingdom has reason to continue its relationship with the Pentagon. If nothing else the royal regime needs spare parts and training to maintain its forces. That need will only grow if Riyadh no longer can count on America to protect it from its own folly.

Commercial sales beyond weapons are even less important to America’s $20 trillion economy. If MbS is serious about reforming his nation’s energy-dependent and welfare-centered economy, he is going to deal with American companies. A presidential desire that the Saudis spend their money to buy products as well as lobbyists and think tanks is not a good reason to insulate a murderous, irresponsible, and reckless regime.

The administration should stop acting like it is beholden to MbS. It should not, for instance, press Ankara to go easy on the Saudis. Reports that the administration is twisting the extradition process involving Muslim cleric Fethullah Gulen as quid pro quo for Turkish dictator-wannabe Recep Tayyip Erdogan is shocking, if true. Moreover, the United States should end all support for the Yemen war. Weapons sales also should be placed on hold at least until KSA pledges a behavioral change.

This doesn’t mean the administration need treat Saudi Arabia as an enemy and refuse to deal with MbS. After all, American presidents engaged Joseph Stalin, Mao Zedong, and Kim Jong-un. The United States must operate in a world filled with ugly, brutal, and authoritarian regimes. In such cases the president’s transactional approach makes some foreign-policy sense. However, there should be no exaggerated expressions of fervent friendship, no illusions about shared values, and no attempt to sugarcoat Riyadh’s sustained assault on human rights and American interests.

The KSA is not an ally in any real sense, let alone a “truly spectacular” one. It is an important state in an important region which must be engaged. The administration should do so, without disguising the disdain with which it treats a murderous and corrupt absolute monarchy. Working together when appropriate should never be confused with endorsing or even accepting such a malodorous regime.