What Should We Learn from 40 Years of U.S. Intervention in the Middle East? 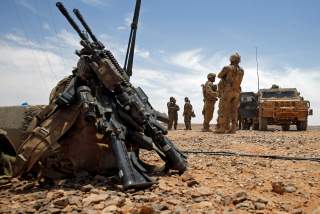 With the surprise announcement of the withdrawal of U.S. forces in Syria, and to a lesser extent, the announcement of a drawdown of 7,000 U.S. troops from Afghanistan, many interventionist critics who had tolerated Donald Trump’s ineffectual strikes against Assad and peace talks with the Taliban seem to have reached a boiling point. But even after Trump defended his position and said Iran “can do what they want there” in Syria, Secretary of State Mike Pompeo and National Security Advisor John Bolton have undercut the clarity of what seemed like a presidential decree mandating a withdrawal.

The Trump administration’s policy in Syria seems to have reverted back to its normal state of political and strategic ambiguity. While the U.S. has begun to remove some assets from northern Syria, Bolton told Israeli officials that a full withdrawal will once again be conditions-based and Pompeo implied that such a withdrawal will be contingent on keeping a “coalition against Iran together.” The rapturous flood of criticism against the original decision from the media, the Washington commentariat, and the U.S. foreign policy establishment, followed by the resignation-in-protest of Defense Secretary James Mattis, seems to have softened Trump’s determination to withdraw.

Many of the critics contended that withdrawing from Syria would be wrong as it will make Iran and Russia happy or grants them a tactical gain. “The mullahs in Tehran will be overjoyed and see signs of another U.S. President’s weakness,” proclaimed the Wall Street Journal editorial board. Much of these arguments seem designed to provoke an emotional reaction for military adventurism where an interest-based imperative is absent. Obviously, the United States cannot devise foreign policy based on conditioning the mood of its adversaries or forbidding them an inch. If the United States had decided against invading Iraq, Saddam Hussein would have been thrilled; it would have also been the right decision. Much of the criticism is a mourning of what critics consider robust U.S. leverage that would have allowed America a meaningful role in designing post-war Syria and limiting, if not outright expelling Iran-related forces.

These criticisms fail to take stock of the lessons that emerge from forty years of U.S. military action in the greater Middle East region. The presence of America’s vaunted military cannot necessarily shape the political orientation and structure of societies. Iraq and Afghanistan are obvious examples. Unrivaled American military power also has failed to contour the decisions of other actors in the theater. The United States failed to sufficiently influence the behavior of sectarian actors in Lebanon during its expedition there. The United States has failed to change Iranian foreign policy even after decades of relative military encirclement. Even after inflicting arguably the most humiliating and decisive military victory in modern history, American soldiers watched from just beyond the border as Saddam defied Washington and violently cracked down on Kurdish and Shia uprisings.

The notion that the United States could use its control on the north to shape the postwar Syrian state and expel Iran has always been a theoretical concept with no clear path to implementation.  In fact, many of the forces that have been deemed Iranian-backed are composed of Syrian citizens. Where would they be expelled too? Most likely, Damascus and its allies will work to secure the rest of the country while waiting America out. The simple fact that has been determinative to much of the conflict is that countries like Iran and Russia have more vital interests in Syria than a faraway superpower.

Others argued that Trump’s “strategy of retreat” from Syria, as the New York Times’ David Sanger called it, will result in chaos and terrorism as the U.S. withdrawal from Iraq did. Mimicking Bush administration talking points, Sanger claimed that “deployed forces are key to stopping terrorists before they reach American shores.” Ilan Goldenberg, a former State Department official and Clinton acolyte, took this line of reasoning to its natural conclusion. He wrote that, “[u]ltimately, the answer in the Middle East is to stay, but in a smaller more sustainable and cheaper way. We may need to have a few thousand troops in some of the various trouble spots in the region such as northeastern Syria for years to come. Their job will not be to ‘win’ but simply to muddle through.” Retired Marine General John Allen, president of the Brookings Institution, argued that “U.S. global leadership and, where necessary, its forces” are needed in ISIS-influenced territory across Asia and Africa “until the idea of the caliphate has been defeated.”

ISIS was quickly defeated because its messianic state building delusion deprived it of strategic flexibility. In having to defend fixed positions, its forces could not focus on the kind of asymmetrical strategies that have been so effective for non-state actors in the region. What’s left of it has already made clear it will not make the same mistake. But indefinite American military occupation of broad swaths of the Middle East is not a simple antidote to anti-U.S. militant action or chaos. In fact, the connective tissue between many of non-state actors is aggressive opposition towards the influence or direct or indirect military presence of the United States or its key allies. A diverse array of non-state actors including Hezbollah, the Taliban and al-Qaeda in Iraq have strengthened or even been established under the noses of American soldiers and marines. In fact, the Sunni Arabs of northern Syria are already chafing under heavy-handed America-enabled Kurdish rule—even “ethnic cleansing”—and the long-term continuation of this trend will invite trouble.

One oft-cited criticism was that it was a betrayal of the very Kurdish group in question. “The West owes them a debt for the price they’ve paid,” argues an opinion piece in the Wall Street Journal. The Kurdish groups in northern Syria, the YPG, decried the original decision as a “blatant betrayal.” But the sponsor-client relationship is inherently bidirectional; they form due to convergences of interests. The Kurds fought ISIS because it posed an existential threat to their communities, not as an expression of loyalty to America. ISIS had once pushed the Syrian Kurds all the way to the Turkish border at many points, and in Iraq, they came close to sacking Erbil.

The overzealous alliance reinforcement ethos that permeates Washington and demands every strategic cooperation be treated as a treaty alliance (or an emotional commitment) demanding America’s unrestricted moral fidelity to the demands and ambitions of the client, is neither necessary for alliance management nor in keeping with U.S. interests.

In the Atlantic, the International Crisis Group’s Joost Hilterman complained that America is “turning its back on [the Kurds] and leaving them at the mercy of the post-Ottoman states,” meaning Turkey and Syria. But the Kurds were already negotiating with Damascus for reintegration and had avoided clashing with Syrian forces throughout the conflict, knowing that their only viable option would be a modus vivendi with the government. If the Kurds were to be “betrayed,” it would not be the result of America under-delivering, but because U.S. military leaders over promised without support from the White House. America still has an enormous military presence across the region and can help those who will fight ISIS in a less invasive manner.

Some of the reporting charged that Trump’s call to withdraw was a political decision and, essentially, an exercise in base management. The specific allegations aside, fatigue with land occupations in Asia is present across the American political spectrum and is actually somewhat stronger outside of the GOP voter base. Moreover, why shouldn’t public opinion be a factor in American military decisionmaking? Due to a series of reasons, such as its military prowess and providential location, America faces little in the way of existential threats and, therefore, can entertain a spectrum of options on how to address interests and security challenges. A de facto occupation of one-third of Syrian territory was never the only or the obvious course of action.

A more reasonable line of criticism centered on the original withdrawal plans being too hasty and lacking strategic guidance. Critics argue that the drawdown should be more gradual so to facilitate allies adjusting and counterterrorism planning. It’s hard to say what America’s policy in Syria will eventually be and when, if ever, U.S. forces will depart. But, any policy will likely be suboptimal if it leaves unlearned the history of U.S. military intervention in the region.