Why the Protests in Iran Are Different 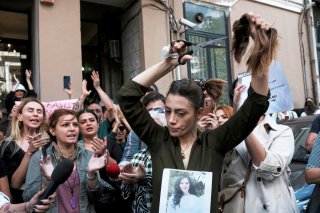 Iranian president Ebrahim Raisi gave his first major, international in-person speech since his 2021 election on Wednesday, when he addressed the seventy-seventh United Nations General Assembly in New York. Raisi’s speech focused on denouncing “double standards” against Iran and speaking out against the United States’ unilateral withdrawal from the Joint Comprehensive Plan of Action (JCPOA) in 2018. Left unmentioned in Raisi’s speech was the backdrop of protests going on in Iran during the last week, which mark the latest and seemingly most intense period of unrest in Iran in recent years.

The spark for these protests was the death of twenty-two-year-old Mahsa Amini. Amini was arrested last week by the morality police for violating Iran’s hijab law, which requires women to cover their hair. Amini’s family says that she was beaten and suffered a fatal head injury while in custody. Iranian officials and state media dispute this account, saying that Amini suffered a heart attack that later put her in a coma.

The response from the population has been quick and widespread. Many have been cutting their hair or taking off their mandatory headscarves, in some cases setting them on fire. Protesters have immediately called for the overthrow of the regime and an end to the Islamic Republic. Human rights groups who have been tracking the ongoing protests say that at least seven people have been killed so far. The Iranian government has responded to unrest by curbing internet access and restricting the ability to use social media platforms, but videos from the protests have gone viral nevertheless.

The regime in Iran is not new to confronting unrest from its people. Over the last few years, protests have erupted as a result of societal and economic injustices like rising inflation or the quality of water. Discontent in Iran has also tended to follow presidential elections. In 2009, protests broke out following the presidential election in which Mahmoud Ahmadinejad declared victory amid allegations of fraud and voting irregularities, in what became known as the Green Movement. Past protests have consistently been met by violent government crackdowns. An Amnesty International report from 2020 detailed the deaths of more than 300 men, women, and children at the hands of Iranian security forces in one week in November 2019. In total, Reuters reported that 1,500 people were killed in 2019.

But there is a belief among close observers of Iran that the latest round of protests over the last week may be more significant than any of their recent predecessors. “The current wave of protests takes courage from those past protests,” writes Mohammad Ali Kadivar, an assistant professor of sociology and international studies at Boston College, in The Washington Post, “but goes beyond them in some significant ways.” Kadivar enumerates four factors that distinguish these protests: that women are leading the way, that prominent Iranians across the country are speaking out, that many Iranians who do not typically take part in protests have stood up in solidarity with women and university students, and that the protests have cut across ethnic divisions.

The intense response is a result of many factors and injustices that Iranians have been protesting for years, including a controversial election and violent crackdowns against dissenters.

Raisi’s election, in August of last year, came amid the disqualification of all his potential reformist opponents and historically low voter turnout in Iran. The presidential election was part of a more systemic sidelining of the moderate elements in Iranian politics. In the 2020 parliamentary elections, the Guardian Council disqualified three times as many candidates from running as it had in 2016. In the 1980s, the president was part of a regime committee that screened and ordered the execution of 5,000 political prisoners.

While there is a sense among observers of Iran that this round of protests is even more intense than its predecessors this century, there is also a fear that we have not yet seen the full extent of the government’s violent crackdown on protesters.

“This is the regime’s own doing. By blocking reforms, narrowing Iran’s political spectrum, and further limiting freedoms — all the while continuing the corruption, repression and mismanagement — the regime is literally pushing people to choose revolt over reform.” writes Trita Parsi of the Quincy Institute for Responsible Statecraft. “But I fear we haven’t seen anywhere near the repressive capacity of the regime yet. There are indications that the state ‘held back’ due to Raisi’s presence in New York.”

The timing of these protests comes at a pivotal time for Iran, with reports surfacing that the supreme leader, Ayatollah Ali Khamenei, is ill (though sources close to the supreme leader have disputed these reports, and he has recently made two public appearances). Iran’s plan for his succession is unclear, as is the possibility that Iran and the United States can reach an agreement to revive the JCPOA, which will greatly impact the country’s trajectory.