Bad Guys Can Do Good in Afghanistan 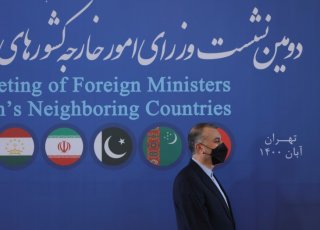 Today’s Afghanistan is an outstanding example of a troubled situation that, while it warrants U.S. policy attention, does not warrant the United States carrying the main burden of managing the situation. Moreover, regimes that are most appropriately and most likely to be in the lead in such management include ones that Americans despise or distrust for a variety of reasons. The United States needs to look beyond such sentiments and realize that greater involvement and influence by an adversary in such a place is not necessarily bad and can advance objectives that the United States shares.

The regime most directly involved is, of course, the one that now rules Afghanistan itself—namely, the Taliban. There still are good reasons to loathe many of the Taliban’s policies and practices, notwithstanding the assurances their spokesmen offered when the group swept into Kabul last year. But like it or not, the Taliban won the Afghan civil war. For the foreseeable future, achievement of anything approaching peace and stability in Afghanistan will mean the Taliban consolidating their victory and overcoming any remaining pockets of resistance.

Furthering such peace and stability is important partly for humanitarian reasons. Rekindled civil warfare would mean making an existing humanitarian crisis even worse.

It also is important for security reasons of interest to the United States. The worst setback the Taliban ever suffered—being ousted from a previous position of power by a U.S.-led military intervention—resulted directly from a terrorist operation against the United States that was conducted by the Taliban’s wartime ally at the time, Al Qaeda. The Taliban have a strong reason not to let anything like that happen again. The circumstance that would most incline the Taliban to reconstruct such an alliance would be renewed civil warfare in which the Taliban once again felt the need for such assistance.

Among outside powers, those in the immediate neighborhood are the ones most heavily involved in Afghan affairs and have good reason to be.

Foremost among them is Pakistan, on the other side of the 1,640-mile-long Durand Line. Pakistan always has perceived a strong stake in Afghanistan, viewing it as “strategic depth” as Pakistan confronts its traditional rival, India. The United States has more often treated Pakistan as an ally than an adversary, going back to its roles in facilitating Henry Kissinger’s first trip to China and in logistically supporting the Afghan insurgency against the Soviets in the 1980s. But when it comes to violent extremism in South Asia, Pakistan has been much more of the problem than the solution. Pakistan has always been the Afghan Taliban’s biggest backer, whose assistance was critical in enabling the Taliban to accomplish what it has. If you want to blame the Taliban for anything, you need to blame the Pakistanis as well.

Now that the Taliban is in control in Kabul—and as long as civil warfare in Afghanistan does not flare up again—Pakistan has good reason to use what influence it has in the direction of stability and moderation. Events on each side of the Durand Line heavily affect affairs on the other side, in both directions—including, most recently, the Taliban reaching out to Afghans residing in Pakistan to come back and help run their regime. The border itself is a matter of dispute and the locale for possible violent incidents.

Probably most important to Pakistan is any energizing or radicalizing effect the Afghan Taliban might have on the constellation of anti-government groups in northwest Pakistan known commonly as the Pakistani Taliban, which have lately exhibited a resurgence. Islamabad, playing its game across the border with the Afghan Taliban, for too long gave insufficient priority to dealing with this form of extremism on its own territory. Now the Pakistanis know they have a serious problem.

On the other side of Afghanistan, across a border of 582 miles, is Iran. The Iranians have learned the hard way how much trouble instability and desperation in Afghanistan can cause them. Their diplomats have been killed there. The Afghan drug trade has bred major problems inside Iran in terms of not only trafficking but also drug use by Iranians.

The parallelism of many Iranian and U.S. interests in Afghanistan was demonstrated when, after the ouster of the earlier Taliban regime in 2001-2002, Iranian and U.S. diplomats worked together effectively to fashion a new political order in Afghanistan. Unfortunately, that brief chapter of cooperation ended when George W. Bush, as part of rhetorical preparation for a war in Iraq, shortly afterward declared an “axis of evil” and the total shunning of Iran became U.S. policy.

The same positive Iranian interests in imparting greater stability in Afghanistan and curbing the drug trade remain, however. To the extent Iran has a more parochial interest in Iran, it is one that is very much in line with international humanitarian and human rights concerns: protecting the interests of the largely Shia Hazara ethnic group, which has been persecuted by the militantly Sunni Taliban.

Too often, U.S. thinking about Iran has been that any expansion of Iranian activity and influence, anywhere and over anything, is ipso facto bad. Such an attitude is clearly mistaken when it comes to Afghanistan.

Another foreign power in the neighborhood is China, which shares only a short border with Afghanistan at the end of the Wakhan Corridor but nonetheless feels the hazards of geographic proximity. Beijing’s main concern is any influence that Islamist militancy in Afghanistan may have on Uighurs in the northwest Chinese province of Xinjiang. China also has economic interests in Afghanistan, especially in exploiting natural resources such as copper, and is the largest source of foreign investment in the country.

Both the security and the economic interests imply a Chinese interest in greater peace and stability in Afghanistan. Consistent with this, China has used its diplomatic good offices to mediate between Afghanistan and Pakistan and hosted talks between the Taliban and the previous Afghan government.

Powers in the neighborhood such as China had been to a large extent free riders as the United States expended two decades’ worth of blood and treasure in what became a futile nation-building effort in Afghanistan. That arrangement has now ended with the completion of the U.S. military withdrawal last year, and the neighbors with bigger and more immediate interests in Afghanistan are appropriately coming closer to playing lead roles in dealing with what is still by any measure an unstable and trouble-laden place.

U.S. policy post-withdrawal can and should demonstrate how U.S. engagement can be substantial without being military. Cooperatively working on Afghan matters with the concerned neighbors, along the lines of the U.S.-Iranian cooperation two decades ago, where interests run parallel will serve the interests of all the governments involved as well as of the beleaguered Afghan people.

Similar cooperation with the Taliban regime, even if full diplomatic relations are not in the cards any time soon, would serve the same interests. The immediate need for doing business with that regime is humanitarian, but such cooperation also would serve objectives such as quashing any incipient terrorist threat from the Afghan branch of the so-called Islamic State or ISIS, which currently presents the principal threat of escalating violence against civilians in Afghanistan.