The Coming Crisis with Iran, and Why It Was Avoidable 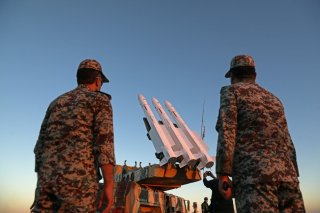 Though not certain and still avoidable, the most pressing and salient foreign policy problem to grab headlines in the next several weeks may well be an escalated confrontation with Iran, with the threat or even the reality of open warfare. Several circumstances combine to raise this possibility.

One is the failure of the Biden administration to approach a return to compliance with the Joint Comprehensive Plan of Action (JCPOA)—the multilateral agreement that severely restricted Iran’s nuclear activities—in the simplest and most direct manner possible. It was the United States under President Donald Trump that reneged on the JCPOA and led to noncompliance; it is the United States under President Joe Biden that must undo what Trump did.

The Iranian role in this story has been entirely reactive. After voluntarily continuing to comply with the JCPOA’s limits for another year after the United States reneged, Iran began exceeding those limits to exert counterpressure as the Trump administration escalated its economic warfare. The Iranian regime made it clear that although it will meet U.S. demands and pressure with demands and pressure of its own, it would welcome a clean return to full compliance with the JCPOA as it was originally negotiated.

Admittedly, undoing the Trump administration’s damage on this matter never was just a matter of the current president signing an executive order rescinding what Trump had done. There are domestic political hurdles that Biden must surmount, made all the worse by the previous administration’s “sanctions wall” tactic of piling on sanctions that bear some other label such as human rights or counterterrorism but that really were intended to make it difficult for a successor to save the JCPOA. There also are details of timing regarding exactly when each party to the agreement would act to restore compliance. But to get back to full compliance the Biden administration should have striven constantly to keep the task stripped down to its barest essentials of reversing the United States reneging on its obligations under the JCPOA.

Instead, the administration has complicated matters by trying to expand negotiations with Iran and to elicit Iranian commitments that would go beyond the nuclear subject matter of the JCPOA. It reportedly has sought, for example, an Iranian commitment to negotiate restraints on Iran’s ballistic missiles, even though any such approach that focuses narrowly on Iran’s weapons while ignoring the missile and air capabilities of other states in the region would be a non-starter for any regime in Tehran.

The administration’s attempt to expand the negotiations has been accompanied by rhetoric that, while perhaps understandable as a tactic to try to pressure the Iranians, has reduced trust needed for a return to compliance and at times played into the hands of those who never supported the JCPOA and still want to kill it. Secretary of State Antony Blinken’s early comments, even before he was confirmed as secretary of state, that Iran had to make the first move toward a return to compliance disregarded the reality that it was the United States, not Iran, that reneged on the agreement.

The domestic political repercussions from the enormous recent attention to events in Afghanistan will tend to push Biden toward a harder rather than a softer line on everything having to do with Iran. That means less willingness to take the steps necessary to return to compliance without squeezing some sort of new concessions out of Iran.

It also means—given how, in American politics, Iran issues also tend to be Israel issues—continued deference to the Israeli government, as was in evidence in Biden’s recent meeting with Israeli prime minister Naftali Bennett. The Israeli role on this issue continues to be one of opposing, for reasons other than nuclear nonproliferation, any diplomacy with Iran on anything. When Defense Minister Benny Gantz recently seemed to say that he could live with an Iranian nuclear agreement, his spokesperson hastened to clarify that he still opposed a return to the JCPOA even though he might accept a “longer, stronger, and broader” formula. The current Israeli government represents no significant change from its predecessor in the use of assassinations and sabotage, rather than diplomacy, as the core of its policy toward Iran.

The assassinations and sabotage already have sabotaged nuclear negotiations by leading the Iranian regime to stiffen its position. This exacerbates the effect that Trump’s “maximum pressure” approach already had in strengthening the political position of hardliners in Tehran and discrediting those Iranians speaking up for taking risks in diplomacy with the United States.

The whole unhappy episode of the United States reneging on its commitments—and with the panoply of sanctions still in place under Biden—has led Iran to insist that the United States “guarantee” that no such reneging will recur. This is partly a matter of Iran countering new U.S. demands with demands of its own, but it is an entirely unsurprising demand given recent history.

Biden is unable, of course, to offer any such “guarantee.” The backdrop to this reality is the continued recalcitrant Republican opposition to the JCPOA, dating back to when Republicans, even before they became the party of Trump, reflexively opposed the accord as an achievement of Barack Obama.

Ultimately the big underlying cause of a possible U.S.-Iranian crisis in the weeks ahead is the Trump administration’s renunciation of the JCPOA and initiation of unrestricted economic warfare against Iran. Had that not happened, then there is every reason to believe that the Iranian compliance with the JCPOA restrictions on its nuclear activities, which already had a track record of three years as of 2018, would have continued through today. There would be no crisis brewing. Further negotiations with Tehran, on nuclear as well as on other matters, probably would be underway or about to start, and they would be taking place against the backdrop of confidence that comes from mutual adherence to a prior agreement.

Iran’s willingness to submit itself to the severe restrictions and the intrusive international monitoring of the JCPOA reflected a strategic decision in Tehran that being a non-nuclear weapons state fully integrated into the global political and economic systems was preferable to being a nuclear-armed but sanctioned and ostracized pariah. Tehran does not appear to have reversed that decision yet, as suggested by, among other things, its recent interim agreement with the International Atomic Energy Agency (IAEA) on servicing monitoring equipment. But Iranian policymakers may revisit the decision if negotiations on JCPOA compliance break down and any prospect for sanctions relief disappears, and especially if an armed attack on Iran appears more likely.

As if to remind us of that possibility, the chief of the Israeli general staff recently declared that he had “greatly accelerated” plans for a military attack on Iran. The comment barely raised eyebrows in Washington. As an indication of the double standard applied to the two halves of Israel-Iranian enmity, imagine what the reaction would be if the head of the Iranian military said that he had accelerated plans for an attack on Israel.

The most similar past experience of what Israel might try again with an armed attack was a complete failure and even counterproductive as far as nuclear nonproliferation was concerned. In 1981 Israel attacked from the air an unfinished nuclear reactor at Osirak, Iraq. The Iraqi reaction was to energize and accelerate what had been a largely moribund nuclear weapons program, mostly by initiating a covert program to produce fissile material through a different method. The substantial progress that Iraq subsequently made toward getting the bomb was discovered ten years later in the wake of Operation Desert Storm. There is little reason to believe that the Iranian reaction to a similar attack would be fundamentally different.