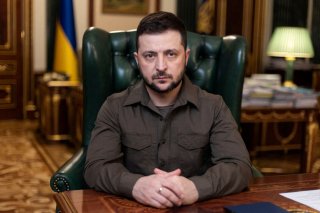 The Russian regime of Vladimir Putin probably is not yet ready to engage in negotiations in a sufficiently serious and fair-minded manner to end the war in Ukraine. Putin most likely sees a need first to redeem the image of Russia and its armed forces and improve its bargaining position by scoring some clearer military successes, probably through additional territorial gains in eastern Ukraine. But some kind of negotiated deal will eventually be the only way to bring the war and the suffering it has caused to a definitive conclusion.

Neither side is capable of bringing about such a conclusion through military means alone. Russia already has demonstrated its inability to secure its primary military objectives. And although Ukraine’s resistance has led some observers to declare it the “winner” in some respects, it is militarily incapable of expelling Russian forces from disputed territory or even from all the territory that Russia has seized since the current war began in February.

Whenever serious negotiations appear nearer, disagreements among Ukrainians and their foreign supporters over what peace terms should be considered acceptable will become increasingly apparent and will mar what international unity there has been so far in standing up to Russia’s aggression. A lack of consensus that already existed among Ukraine’s supporters regarding some issues in dispute between Russia and Ukraine has been exacerbated by the war itself and the way the Russian military has conducted it.

It would be difficult to formulate a simple and agreed-upon statement of the objective of the Ukrainian side in this war. Some of the more minimal statements coming out of Ukraine itself speak of saving the lives and livelihoods of Ukrainians and keeping them from living under a Russian dictatorship. Elsewhere in the West, there has been no shortage of maximal statements that Russia “must be defeated” and that Ukraine “must win.” The atrocities that have come to light in areas from which Russian forces have retreated will fuel more maximalist thinking.

Lack of consensus on objectives will probably be accompanied by a lack of consensus on what is militarily achievable. Conceivable Ukrainian military objectives range from what is almost certainly out of reach (such as retaking Crimea) to what the Ukrainians have already demonstrated is within reach (such as regaining some Russian-occupied areas near Kyiv). There is ample room for disagreement among analysts as to where on that spectrum any one objective may be.

Acceptability of specific peace terms is a matter, first of all, for the Ukrainians to sort out among themselves. President Volodymyr Zelenskyy has demonstrated now-legendary leadership skills in inspiring national resistance against the Russians, but his political skills will be sorely tested in adopting a posture toward a negotiated peace that will incite—as almost any posture in this situation will—anger from countrymen who believe he is not concluding a highly-destructive war soon enough or from other Ukrainians who think he is conceding too much to a hated Russian regime. He may well encounter anger from both.

The United States and other outside supporters should not try to manage this intra-Ukrainian debate. Supporters need to be aware of the range of views within Ukraine, however, and of the domestic pressures Zelenskyy will be under.

The divergence of opinions about acceptable peace terms will extend to the United States and its Western allies. Most attention so far regarding different transatlantic views on the Ukraine crisis have focused on different degrees of toleration of sanctions on Russia, especially given European dependence on imported energy. But different views about how to end the conflict also will flow from the conflict being conceived as more than just a war between Russia and Ukraine. Various conceptions of the war have also seen it as a contest between democracy and autocracy, between respect for national sovereignty and a lack of respect, between humanitarianism and inhumanity, and as a competition between great powers.

Most of those conceptions may imply holding out for better peace terms, at the risk of prolonging the war, than what most thinking in Kyiv might favor. There is a temptation, reflected in some of the most determined-sounding rhetoric coming out of the West, to fight this war to the last Ukrainian. That would be morally wrong. It also would be unwise for other reasons besides not prolonging the suffering of innocent Ukrainians.

It is unlikely, even if the Ukrainians continue over the next several weeks to fight as effectively as they have so far, that any conceivable peace settlement would restore Ukrainian control over all Ukrainian territory, including the Donbass and Crimea. Zelenskyy surely realizes this but also needs to avoid the politically painful, and probably politically suicidal, step of formally ceding territory in the face of Russian aggression. Squaring this circle probably will entail Ukraine and Russia agreeing to disagree about these territories, with de facto separation not accompanied by any de jure recognition by Kyiv. Some elements of such a formula are in a peace proposal that Ukraine reportedly already has given to the Russians.

The one plausible alternative to a negotiated and signed settlement that could wind down the war—a frozen conflict in which the firing nearly stops with Russian troops still in most or all of the Donbass as well as Crimea—would in most respects be a functional equivalent of the kind of settlement just described, although a formal agreed armistice would be better.

One theme sounded in much commentary about the war is that whatever kind of peace is to be reached must somehow assure that Russia will not violate the agreement and invade Ukraine again in the future. The general point about the needed longevity of peace agreements is valid, but this is a requirement that the war itself has made easier to meet. Given the military setbacks and enormous costs that Russia has sustained in this war—and the lessons this experience holds for any present or future Russian decisionmaker—the threshold for Russia ever invading Ukraine again is now much higher than it was two months ago.