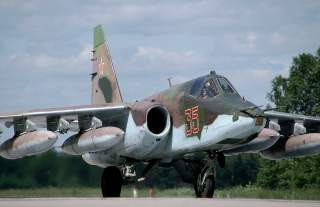 As multilateral talks begin in Vienna to search for a possible resolution of the Syrian civil war, we should realize that even when a foreign government is not being entirely above board in explaining what it is up to, it still may be honest in identifying part of what motivates it. The principal government in question regarding the Syrian situation is that of Russia, which has said a lot about beating back the so-called Islamic State or ISIS but whose military operations so far in Syria seem to be saying something else. Russian military strikes directed against other opposition groups in Syria may actually be helping ISIS insofar as they bring ISIS closer to becoming, or at least appearing to be, the only viable alternative to the Assad regime.

Despite this apparent divergence between talk and action, Russia undoubtedly and genuinely considers ISIS to be a significant threat. This is partly because ISIS currently is the principal inspiration for individual Muslim radicals and would-be radicals within the Russian federation, especially in the north Caucasus. Estimates of the number of Russian citizens who have joined ISIS are in the thousands, with perhaps the single biggest concentration of them being from Dagestan, the province at the eastern end of the north Caucasus region. The problem for Russia is only likely to get worse, and statements from Russian officials indicate they realize that. So far an exodus of radicals to join the fight in the Middle East may have reduced the chance of trouble in Russia. The worry, which President Vladimir Putin has expressed, is over what happens when the radicals who survive return home.

It is impossible for us to measure the relative weights of the variety of Russian motives for militarily intervening in Syria. Notwithstanding all that has been said, however, about Moscow wanting to assert itself and maintain its presence in the Middle East, the ISIS-centered radical threat to Russia has to be one of the weightiest motivations. This concern exists against the background of several high-casualty terrorist attacks over the past decade and a half inside Russia by radicals from the Caucasus, with some of the attacks occurring within the city of Moscow. Homelands matter, for Russians as they do for Americans.

We should assume that Russian decision-making in the months ahead will be guided by the considerations just mentioned. Putin and his advisers probably are smart enough to understand the possible long-term counterproductive effects, as far as beating back ISIS is concerned, of some of their military operations to date, however much they wanted in the short term to shore up Assad's regime and to make whatever other statements they wished to make with their intervention. The United States and Russia have more interests in common with regard to Syria than current military operations may suggest—insofar as the United States is focused on countering ISIS and not distracted by the habit of measuring success in the Middle East by the number of regimes that get toppled.

As for what all this means for specific future Russian decisions on Syria (and perhaps on Iraq), Moscow has to perform the same sort of balancing of considerations that the United States does even if it were solely focused on countering ISIS. On one hand there is that problem of how the success of ISIS on the ground in the Middle East has been a malevolent inspiration for individual radicals back home. Push back ISIS on the ground, and it won't look so much like an inspiring winner. But on the other hand there is the danger of military operations in the Middle East provoking attacks against the country conducting those operations. The provocation may be a matter of calculated retaliation by a group or of rage and radicalization driven by the damage and casualties that such operations cause. If the Russians think this through, their thoughts may lead them to revise their targeting policies; the airstrikes against non-ISIS opposition groups can raise the risk of terrorist attacks against Russia while doing nothing to push back ISIS.

Pursuing this line of thought even further—and here's where U.S. and Russian interests begin to diverge again—it is in Russia's interest to have someone else, such as the United States, bear more of the dangerous terrorism-provoking burden of pushing back ISIS. The common goal of pushing back this group is achieved, while the more divisible cost of terrorist retaliation is borne by someone else.

The policy implication for the United States is that it should view the situation in a very similar way but with the roles reversed. It is in U.S. interests for someone else, such as Russia, to bear more of the danger and the costs of achieving the common goal of pushing ISIS back. This is the game that the United States and Russia are playing today in Syria—not some game of filling vacuums in which winning is seen as doing more things and having more of a presence in a foreign land than the other guy does.