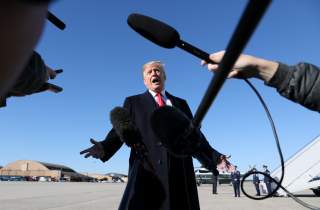 The Trump administration’s handling of the Jamal Khashoggi affair, and the domestic U.S. politics associated with it, display on two levels an extreme form of tribalism. This type of tribalism involves drawing rigid lines according to fixed loyalties and never seeing any good on the other side of the line or any evil on one’s own side. It means subordinating everything, even principles, to sustaining the strength and the power of one’s own side.

As anticipated, President Donald Trump—grudgingly recognizing the outrage over what happened to Khashoggi—is trying to formulate the minimum possible response to the outrage, with minimum disturbance to U.S. relations with Saudi Arabia. The administration’s posture was reflected in Secretary of State Mike Pompeo smiling his way through a photo op as he sat down with Saudi Crown Prince Mohammed bin Salman (MbS), who, however much he might want to diversify and modernize the Saudi economy, has the political and human-rights record of an autocratic thug.

Trump appears eager to support whatever cover story about Khashoggi’s fate the Saudi regime concocts, as suggested by his reference to a possible “rogue” operation. He has stayed on this path despite overwhelming evidence in the public domain, based on leaks from the Turks and investigative press reporting, that Khashoggi died in a premeditated operation, bone saw and all, that could only have been launched with approval from the highest levels in Riyadh.

The eventual Saudi cover story may be hard for any objective observer to swallow. One report indicates that a major general in the Saudi intelligence apparatus has been tapped to take the blame. The prospective fall guy’s rank and position may make plausible his ability to order and organize such an operation, but his very seniority and closeness to the crown prince would still leave it implausible that MbS had nothing to do with the affair.

Trump’s approach has been part of his administration’s tribalist approach to policy in the Middle East, in which Saudi Arabia serves as one of the supposed good guys on the U.S. side of the line and, on the other side of the line, its cross-gulf rival Iran is depicted as the source of all evil in the region. The approach involves shameless application of double standards. Imagine how the administration would have reacted if Iran had done anything like what occurred in that Saudi consulate in Istanbul. Those itching for a fight with Iran, such as National Security Advisor John Bolton, would have considered such an event to have been more than enough for a casus belli. The United States probably would have gone to war against Iran a week ago.

Shameless application of double standards has become familiar to observers of domestic U.S. politics. Hardly a day goes by anymore without Trump’s partisans providing cover or excuses for whatever is the president’s latest outrageous exclamation or act and that would deservedly torpedo most political careers. (This week, for example, there has been Trump’s praising of a Republican congressional candidate—who was found guilty of assault for physically attacking a reporter—with the president saying, “Any guy that can do a body slam . . . he’s my guy.”)

The president’s eagerness to give a pass to a regime that has brutally murdered a journalist who was a U.S. resident writing for an American newspaper has become one more Trumpian excess for his partisans to excuse. Once again, no means are overlooked in defending this presidency and whatever desired ends the defender associates with it. The most scurrilous means employed in the present case include a campaign to smear Jamal Khashoggi, a campaign that has support from some Republicans on Capitol Hill and from a presidential retweet. The depiction of Khashoggi as a Muslim Brotherhood infiltrator or a friend of terrorists is belied by his columns—including his final, posthumously published piece, which was an appeal for the Arab world to be exposed to more free, diverse opinions and more objective press reporting.

Those who support the Trump administration mainly for the way it rigidly divides the Middle East into purported friends and enemies have joined in the smears against Khashoggi. This includes at least one prominent person at the Foundation for Defense of Democracies—an organizational name that always has been misleading but is especially so regarding Khashoggi and what MbS’s autocracy has done to him.

Another of the president’s excusers is televangelist and former presidential candidate Pat Robertson, who calls for remaining nice to the Saudi regime because of all those arms sales the president keeps talking about. You know a moral compass has been lost when someone who gained fame as a Christian preacher says we should brush aside the killing of an innocent journalist for the sake of selling munitions. Such a posture also reflects the loss of any political compass that keeps in sight where U.S. interests in the Middle East do and do not lie.