National Security and the Lasting Damage of Ruthless Partisanship 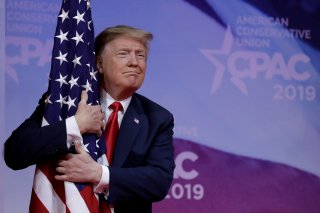 As Donald Trump’s electoral prospects diminish amid a pandemic-induced recession, his blame-deflecting attacks have become ever more desperate. The most immediate and obvious damage from a presidential performance characterized by desperation and demagoguery is to be measured in terms of public health and the toll of the coronavirus. At last count, the United States, with 4.2 percent of the world’s population, had 31 percent of the coronavirus infections and 29 percent of the deaths. This type of damage is likely to get even worse as Trump rolls the dice on an economic recovery between now and November 3 that he hopes will overshadow the resurgence of disease and death that epidemiologists say will result from premature relaxation of pandemic-required restrictions.

The ruthless partisanship and attack tactics of Trump and his followers also have other ill consequences, however, that will persist long after the pandemic has eased and any thoughts of drinking disinfectant or popping hydroxychloroquine pills have faded. Moreover, many of the ill effects will persist well after Trump’s presidency, despite efforts of his successors to repair the damage.

In international relations and foreign policy, relations with China are perhaps the prime example, with a plunge into a new Cold War being partly a byproduct of the attempt by Trump (and those executing his tactics, especially Secretary of State Mike Pompeo) to use China as a foil to divert blame from Trump’s own mishandling of the pandemic.

Some of the most fundamental damage is to institutions and procedures that involve law and national security that are supposed to be beyond partisan politics. The damage includes not only the immediate politicization of issues of the day but also a subversion of government bureaucracies that have important legal and national security responsibilities. It also includes damage to public trust in those institutions. Trust is essential for those institutions to perform their functions. Damage to that sort of trust takes a long time to repair.

Multifaceted attacks on the rule of law have been in large part the work of Attorney General William Barr. In a rapid series of moves, Barr has turned the Department of Justice into a political weapon to protect Trump’s friends, punish his opponents or those who unearth embarrassing facts, and sustain partisan narratives about law enforcement, national security, and relations with foreign states.

Most recently, the emphasis in the Trumpian tactics has been on a narrative about supposed malfeasance the previous administration committed while national security agencies performed their duty of investigating the many dimensions of Russia’s interference in the 2016 U.S. election. This narrative dates back to the beginning of Trump’s presidency, with the accusations of malfeasance intended to counteract the politically embarrassing fact that the Russian interference was one of the factors that may have helped Trump to win the presidency, and that rather than rebuffing such help and reporting it to the responsible authorities, Trump and his campaign welcomed it. (Or in the unexpurgated words of Donald Trump, Jr., “I love it.”)

With the added desperation brought on by the pandemic and associated recession, Trump now is not even bothering to construct a semi-coherent script for the narrative, as demonstrated by a remarkable exchange with a Washington Post reporter at a recent press conference. When the reporter asked, “What crime exactly are you accusing President Obama of committing?” Trump responded, “Obamagate. It’s been going on for a long time. It’s been going on from before I even got elected. And it’s a disgrace that it happened.” After more of such a non-answer, the reporter posed the question again, to which Trump replied, “You know what the crime is. The crime is very obvious to everybody. All you have to do is read the newspapers, except yours.”

Trump has thus brought partisan invective to its highest—or lowest—form ever: pure innuendo, uncluttered not only by any facts but even by any substantive assertions.

Trump’s short-tenured first national security adviser, Michael Flynn, has been at the center of this latest amended narrative. Barr shocked prosecutors when he ordered the dropping of charges on Flynn, in a contorted filing, for crimes to which Flynn had already pleaded guilty. Now, the Trump camp is trying to make something of the fact that Flynn’s identity had been “unmasked” by officials endeavoring to interpret intercepted communications involving, among other things, Flynn’s off-the-books dealings with the Russians.

Richard Grenell, the partisan warrior whom Trump installed as acting director of national intelligence, made a public show of delivering to Barr’s department the identities of officials in the previous administration who had requested the unmasking, with Fox News evidently having been tipped off to be able to record the delivery. The whole show was obviously intended to suggest that those officials had done something nefarious.

No evidence has surfaced that they did anything improper. Such unmasking, under strict controls as an exception to otherwise strict concealment of the identity of U.S. persons referenced in intercepted foreign communications, is a necessary and well-established procedure. Officials in the Trump administration have used the procedure substantially more often than their counterparts in the Obama administration ever did.

That investigators scrutinized and questioned Flynn also was well-grounded and fully justified, not only in the context of what Russia was doing in trying to influence both the election and U.S. policy but also because of traditional counterintelligence concerns. As Mary McCord, former acting assistant attorney general for national security points out, the Russians knew, as the American public did not at the time, that Flynn was lying about doing business with the Russian ambassador. That made him a prime target for Russian blackmail.

Seemingly forgotten in the attempt to make Flynn a prop in accusations of misconduct in the previous administration was how the early Trump White House—and specifically Chief of Staff Reince Priebus and White House Counsel Donald McGahn—determined that Flynn’s repeated lying about his conversations with the Russian ambassador, both to the FBI and to Vice President Pence, meant he had to go. Also forgotten is not only that Flynn admitted in court that he was guilty of that lying but that his admission was part of a plea deal in a case in which he could have been hit with additional charges of concealing paid work he had done for the Turkish government. But those desperate to construct a partisan attack will take whatever prop they can get.

A few seconds of reflection should be sufficient to realize how vacuous the charges are about officials wanting to “unmask Flynn.” By definition, the identity of a U.S. person mentioned in an intercept is unknown to those who might request an unmasking.

The Dog That Didn’t Bark Before the Election

An even bigger and more glaring fact of recent history concerns what did and did not become public knowledge before the 2016 election when revelations could have made a difference in the election result. That the Russian influence activity, and how it evidently was intended not only to discredit American democracy but also to tilt the contest against Hillary Clinton and in favor of Trump, was serious enough to have become an object of concern to U.S. security agencies was a bombshell story waiting to be leaked. If either the Obama administration or the supposed “deep state” had wanted to torpedo Trump’s candidacy, the story would have leaked back then. It didn’t.

The only election-influencing revelation by the security agencies during the election campaign was James Comey’s announcement that the FBI was looking again at Hillary Clinton’s emails. Comey later stated there wasn’t anything material that came out of that investigation. In contrast, there was a great deal that came out of inquiries into the Russian influence campaign, as the world knows now from press reporting, public judgments from the intelligence community, Special Counsel Robert Mueller’s investigation and prosecutions (including the prosecution of Michael Flynn), and a separate inquiry of the Senate intelligence committee.

In much of Trumpland, none of this will matter. Many of the faithful will hear cries of “Obamagate” and that will be enough for them to believe that something nefarious must have happened under that theme. State television—that is, Fox News—will ensure that even American coronavirus deaths moving into six figures will not detract attention from the theme.

All Americans—including partisans of every stripe and even strong supporters of Trump—ought to be concerned about the longer-term effects of the corruption and discrediting of the national security procedures and institutions involved. There will be more foreign attempts at undermining American democracy, and not just by Russia—although Russia itself already seems likely to do it again. There will be more counterintelligence cases that raise the danger of serious compromises to U.S. national security, and not just cases involving incoming national security advisers. To the extent that foreign machinations tilt in favor of one U.S. political party over another, it is unknown which party might be favored in any future foreign caper.

Damage can take the form of officials self-deterring and not using the tools available to them to counter foreign covert action and intelligence collection. It can take the form of officials self-censoring and not sounding alarms about foreign influence attempts, for fear of being dragged into partisan battles. The attractiveness to people who work in such national security organizations will be further diminished, with the effectiveness of those organizations diminished as well.