Regime Change in Cuba: Be Careful What You Wish For 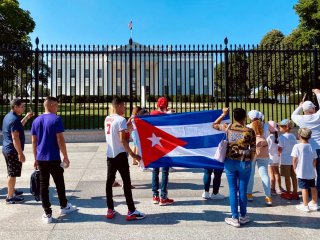 U.S. policy toward Cuba has been subordinated to domestic politics probably more than any other U.S. foreign policy issues apart from those involving Israel.  The U.S. embargo of Cuba—which has persisted for decades without positive results, and has been subject year after year to condemnation at the United Nations—has largely been about catering to the votes of those Cuban-Americans who have fervently opposed the Castro regime and are mostly concentrated in Florida.

Now, in the wake of the largest street protests in Cuba in years, U.S. domestic politics again drive the discussion.  Some Democrats, worried about ground their party has been losing in Florida, are urging President Biden to use the occasion of the protests to switch to a more militant posture on Cuba.  The president’s initial comments about the situation in Cuba suggest he may be responsive to that urging.  Both parties are making sure they are not outdone in expressing support for the protestors and opposition to the authoritarian aspects of the Cuban regime.  Posturing is getting more emphasis than policy.

To the extent that real discussion of policy emerges, it can be expected to follow familiar political and ideological lines.  The inevitable argument from the right is that the protests show that pressure from the United States works.  One valid aspect of this argument is that the Biden administration so far has not appreciably changed the hardline policy toward Cuba it inherited from the Trump administration, and in that respect a hard line is the status quo.  Another is that U.S. economic warfare against Cuba clearly has contributed to the economic hardship on the island that has driven this week’s protests.

But responsible policy analysis needs to consider much more than that.  For one thing, the story of Cuba’s poor economic performance goes far beyond the effects of U.S. pressure.  The Cuban regime’s own policies, burdened with a communist legacy, are a large part of that story.  Once highly dependent on support from the USSR, the regime never fully adjusted to the withdrawal of that support in the 1990s.  More recently, the covid-19 pandemic has contributed significantly to Cuba’s economic problems.

Insofar as U.S. policies have affected the Cuban economy, timing needs to be considered.  The trade embargo has been in place for more than half a century; it does not explain why protests broke out this summer.  Criticism of Barack Obama’s thawing of U.S.-Cuban relations for not yielding major change in Cuban policies overlooks not only some of the purposes of this policy change, including a reduction in U.S. isolation on the Cuba issue, but also how little time the thaw was in effect.  Full diplomatic relations, with fully staffed embassies, between Washington and Havana were restored less than two years before Donald Trump came into office and cancelled what Obama had done.  And the embargo, which would require an act of Congress to rescind, remained in effect throughout the Obama years.

Someone else’s economic suffering does nothing directly for U.S. interests.  Neither does unrest in someone else’s streets.  U.S. interests begin to benefit only when the regime in the country in question or that regime’s policies change in a favorable direction.  So far there is no sign of that happening in Cuba.  The protests this week do not betoken an organized opposition, despite some coordination through the internet and social media.  In the near term the Cuban regime’s policies are apt to become even harsher than before.

The more that the United States becomes identified with opposition protestors, the more those protestors risk becoming perceived as a tool of foreign influence—and in so doing, reducing the chance that their actions will become an instrument of political change.  The Cuban regime already has been promoting the theme of U.S. interference in explaining the protests.

Notwithstanding U.S. politicians of all political stripes proclaiming their support for the Cuban people, it is those people, not the regime, who have been hurt most directly by the U.S. economic warfare.  As with other cases in which sanctions and embargos have been used to try to achieve political change in a foreign country, several issues need to be considered.  One is the questionable morality of intentionally imposing hardship on people who are not responsible for the policies or regime that the imposer wants to change.  Another is the prospect that those people, perhaps with good reason, will blame the United States for that hardship at least as much as they blame their own country’s regime.

Policymakers also should consider positive roles that Cuba can play in regional affairs and that the U.S. policy of ostracism may prevent it from playing.  Right now, the most significant such role may be help in dealing with the situation in Venezuela.

Finally, those who wish most fervently for a change of regime in Cuba should be careful what they wish for.  A change of regime is not necessarily a change for the better.  Stories of regime change in this region may not turn out to be markedly happier than they have been for the United States elsewhere, as in the Middle East.  Fidel Castro’s revolution overturned not a democratic order but instead the repressive police state of dictator Fulgencio Batista.  In more recent years, democracy in Latin America has been eroding more than it has been expanding.

In any event, policy toward Cuba is more likely to be sensible and effective the more it can be separated from domestic American politics.  The situation in Cuba is too complicated to be reduced to an adjunct of vote-counting in Florida.