Russian-Israeli Conflict in the Skies of Syria 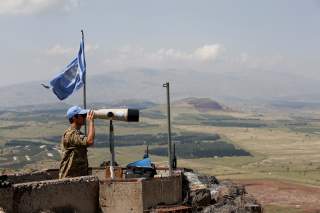 The sudden ruffling of Israeli-Russian relations over the accidental shootdown by Syria of a Russian surveillance aircraft, killing fifteen crew members, is the sort of incident apt to happen when a modus vivendi joins parties with much different perspectives, one of them broad and the other narrow.

Russian president Vladimir Putin has the broad perspective. His policies toward both Syria and Israel are part of a strategy of making Russia an important player throughout the Middle East. It is a good realist strategy, worthy of emulation, in which Russia talks with everybody and does not allow any rigid division of the region into friends and foes to constrain its diplomacy. Putin has played his cards skillfully and has made his government a more broadly influential interlocutor in the Middle East than the United States despite having expended far fewer resources in the region than the United States has over the last couple of decades.

Dealing with Israel has not compromised the Russian commitment to the Syrian regime of Bashar al-Assad or the reasons for that commitment. To the contrary, consultations with the Israelis have provided useful deconfliction of military operations and probably have prevented something like last week’s downing of the Russian plane from happening much sooner. Russia’s objectives are also served to the extent it can nudge Israel to focus on targets that have more to do with Iran and Hezbollah and less to do with the Syrian regime.

The Israeli government of Benjamin Netanyahu—who has traveled to Moscow to confer with Putin three times so far this year—has the narrower perspective of seeking to throw its military weight around outside its borders with impunity. Its focus in Syria is on Iran and its Lebanese ally Hezbollah. Neither of those two players could hope to overcome Israel’s military superiority in the area, but for the Israeli government it is the impunity that matters as much as the ability to launch strikes. Its strikes in Syria over the past two years—now numbering at about two hundred—are exactly the kind of operation for which the Israelis do not want to have to worry much about costs and complications.

Military deconfliction, given the extent of both Israeli and Russian military operations in Syria, thus has been as useful to Israel as it has been to Russia. Israel also has tried to do some of its own nudging, especially in getting the Russians to get the Iranians to keep their distance from the line of control along the Israeli-occupied Golan Heights.

There may be some misunderstanding, in Israel as there sometimes seems to be in the United States, about that last dimension, involving Russian-Iranian relations. Although Russia, Iran and the Syrian regime have been functioning as allies in the Syrian war, they each have their own, partly differing, interests. None of them can command the others to do what they believe to be contrary to their interests. Herein lie ingredients for what could be additional ruffles in the Israeli-Russian relationship.

Last week’s incident, however, had more to do with Israel’s propensity for seeking absolute security for itself even at the expense of absolute insecurity for others. It has kept up its series of attacks in a neighboring state even when, in this specific incident, that state felt sufficiently threatened to start firing back. Russia lost fifteen of its service members as a result. Russia—which, unlike the United States, feels no domestic political pressure to sweep under the rug a loss of its countrymen’s lives due to Israeli action in a war zone—eventually had to speak out forcefully. Russian defense minister Sergei Shoigu said Russia was “compelled” to respond further by providing Syria with Russia’s S-300 air defense system, which is more sophisticated than the system Syria already had.

Uncertainties linger about the details of exactly what happened in the Syrian skies last week, and this uncertainty may account for early inconsistency in Russia’s response, which went from hard to soft and back to hard. Russia alleges that Israeli pilots used the Russian plane as “cover” from Syria air defenses. Israel denies that allegation and says its planes had already returned to Israeli airspace when the air-defense missile was fired. In the end, what must have mattered in Russian thinking was the fact that if Israel had not been attacking targets in Syria, the missile never would have been fired.

This dispute and its accompanying ill will are unlikely to lead to fundamental changes either in military operations in Syria or in Russian-Israeli diplomacy. The upgrade of Syrian air defenses will complicate but not stop the Israeli attacks. There may be similar incidents in the future owing to the practical difficulty of separating what belongs to Syria (which Israel, having grown comfortable with the Assad regime as “the devil we know,” is not currently seeking to fight a war against) from what belongs to its Iranian and Hezbollah allies. (The Israel Defense Forces stated that its operation last week targeted a Syrian facility that was about to transfer weapons to Hezbollah on behalf of Iran.) But both Russia and Israel will continue to have the same reasons as before to do business with each other.