Trump Is Wrong: Don't Call the Coronavirus Crisis a 'War' 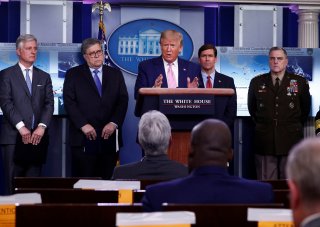 National leaders see multiple advantages in likening their major policy initiatives to war, regardless of whether the policies in question have anything to do with guns and battlefields.

The metaphor of war conveys a sense of extreme seriousness and a need for broad public support. For Americans, whose concept of what war ought to be like is modeled after World War II, the war metaphor also implies hope that, whatever sacrifices must be made in the interim, victory will eventually be achieved. Retired General Stanley McChrystal, who has fought in some real wars, cites both these reasons in referring approvingly to how the metaphor is being applied to efforts to stem the COVID-19 pandemic. The application is by no means new, and the metaphor was part of the lexicon about past “wars” against poverty, drugs, and other undesirable things.

The biggest application of the metaphor over the past couple of decades has been a “war on terror” that supposedly began with the 9/11 terrorist attacks in 2001. Unlike some other warred-against scourges such as poverty, this “war” did seem to start suddenly with a willful act of violent hostility by a human enemy.  ut the notion of a “war on terror” has had fundamental problems, some of which continue to plague the United States today.

One problem is that terrorism is a tactic, not a single enemy or group of enemies. As the late Zbigniew Brzezinski observed, speaking of a “war on terror” makes as much sense as calling World War II a “war on blitzkrieg”. A continuing ill consequence has been inattention to the right-wing terrorism that has been a greater danger to Americans than terrorists of the same ideological ilk as those who perpetrated 9/11.

The whatever-it-takes-to-win message that the war imagery conveys risks hastily shoving aside other important national values and interests, a move the nation is later apt to regret. This is especially true of infringement of civil liberties. Some such infringement during World War II later came to be regretted, as have, at least in some eyes, some of the post-9/11 counterterrorism measures that affected the liberties and privacy of ordinary Americans.

Wars, especially in the American concept as shaped by World War II, have definite beginnings and ends, but counterterrorism does not. The mistaken belief that counterterrorism all started in September 2001 led to the re-inventing of wheels. Because counterterrorism doesn’t end, the application of measures more suitable for a war with a definite end has produced such lingering quandaries as what to do with some of the remaining detainees at Guantanamo.

Then there is the easy slide from the war as a metaphor to war as reality, in which military force came to be seen as the premier way to wage the “war on terror” even where other counterterrorist tools may be more productive and less counterproductive. The lingering cost of this has been a “forever war” with U.S. troops in far-flung places and multiple U.S. administrations failing to find a way to bring them home.

In short, the recent experience with counterterrorism ought to make Americans aware of the hazards as well as the advantages of applying the war metaphor to the current effort against COVID-19.

Characteristics of the Fight Against the Virus:

Certainly, the threat from the virus is very serious, and far more of a threat to the well-being of Americans than terrorism—and in that respect, more worthy of the “war” imagery.  The death toll in the United States from covid-19 already has passed that of 9/11 and appears to be headed many times higher.

The country, and the world, also is facing in a sense a single “enemy” in the form of the specific type of coronavirus that causes covid-19.  But already there is a problem analogous to the one in the counterterrorism of inordinate emphasis on one version of a threat leading to disregard for other versions.  In the current case, the threat is a serious disease, and the problem has included shortages of medicine for those who suffer from other serious diseases because of (possibly erroneous) beliefs that the same medicines work against covid-19.

Moreover, the covid-19 “enemy” is even farther removed from the human volition involved in warfare than terrorism is. Bluster and shows of determination, therefore, don’t work. In referring to World War II, McChrystal cited Winston Churchill’s “we will never surrender” declarations, which served not only to sustain the morale of his countrymen but also to help deter Germany from attempting an invasion of Britain.  Viruses, however, are not deterred.

Issues of civil liberties and of civil and political rights already have come up in the current environment, even though Americans so far have been less restricted in their liberties than Chinese, Spaniards, and some others have. Emergency powers in a place with as strong a democratic political culture as Britain can be assumed with little long-term danger to civil and political rights. But emergency powers in a place such as Viktor Orban’s Hungary are a major step toward realizing authoritarian ambitions.

Donald Trump’s authoritarian tendencies and resistance to oversight make him more like Orban than like the British. With uncertainties about how this year’s presidential election will be conducted—and with Trump’s friend Bibi Netanyahu showing how to leverage the coronavirus crisis into staying in power despite even an indictment for corruption—political maneuvering by Trump that would undermine electoral democracy seems likely.  It becomes all the likelier to the extent he can claim that being at “war” necessitates compromising even democratic principles and practices.

The issue of how the end of the metaphorical war is complicated when applied to the coronavirus. Given what epidemiologists tell us, a burst of short-term sacrifice in the form of highly restrictive lockdowns and quarantines would be more beneficial than any short-term efforts that might be made in the name of counterterrorism. This kind of anti-viral “surge” would pay more dividends than the military surges in Iraq and Afghanistan.

The fight against covid-19, however, will not have an ending even remotely analogous to the World War II surrender on the deck of a battleship.  Even those experts who are optimistic about the development of a vaccine are not talking about eradication of covid-19 in the way smallpox has been eradicated.  Shoving aside other principles and priorities for the sake of “winning” a current “war” is inappropriate when what is needed are sustainable, long-term arrangements that accommodate interests of public health, economic prosperity, and political rights and liberties.

The Possibility of Real War:

Finally, there is the issue of military force, which was central to wrong turns taken after 9/11. At first glance, this issue would not seem relevant to the covid-19 problem.  Everyone realizes that one cannot bomb a virus into submission. But look more closely, and there is both relevance and possible danger.

The wrong turn that President George W. Bush took when he launched an offensive war against Iraq under the rubric of the “war on terror” had several causes, chief of which was a long-held dream among neoconservatives who had gained influence in his administration. But another major factor was Bush finding a sense of purpose and direction by becoming a “war president”. That role could be more easily played by warring against a nation-state ruled by an odious dictator, in a campaign in which front lines could be followed on a map, than by countering a shadowy terrorist group or the even more amorphous concept of “terror”.  The “mission accomplished” event on an aircraft carrier, although later mocked in light of subsequent events in Iraq, was at the time Bush’s shining moment.

Now Trump has declared himself to be a “war president”. He is enjoying the bump in the polls that crises traditionally give incumbents and is reveling in the television ratings of his daily press briefings that serve for him the purpose of mini-campaign rallies. A key question is how long the discrepancy between performance and the self-congratulations at those events can be sustained, and how much the future gruesome numbers about the effects the pandemic is having on the health of Americans and their economy will more than offset Trump’s bump in the polls (which has been far smaller than what Bush received after 9/11).

We know that Trump thinks in wag-the-dog terms of how military adventures could be used to distract attention from domestic troubles because he used to accuse Barack Obama of thinking in exactly those terms. Trump has approached the fight against covid-19 in a nationalist mode in which China is seen more as a problem than a necessary partner in finding solutions.  His administration’s campaign of hostility against Iran—the most likely adversary in any shooting war with the United States—has continued unrelentingly, even though fighting the global pandemic effectively would suggest a different course.  Again there is the potential for a metaphorical war to slide into a real war.