Unfair Obituaries and the Case of Colin Powell 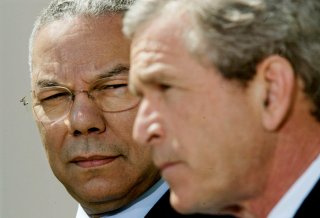 A great American died this week, a victim of myeloma and Covid-19. Upon his death, he also became a victim of the journalistic tendency to highlight moments of controversy that were small parts of a much larger life of accomplishment or public service. In Colin Powell’s case, that moment was the speech before the United Nations Security Council in February 2003 that was part of the George W. Bush administration’s sales pitch for launching a war in Iraq.

The Fourth Estate’s immediate responses to Powell’s passing varied regarding the tendency to highlight the small over the large. The Washington Post, to its credit, gave full and respectful treatment to Powell’s accomplishments both in the obituary by Bradley Graham and in the paper’s lead editorial. In contrast, the New York Times put in the very first sentence of its front-page piece on Powell that he gave the speech that “helped pave the way for the United States to go to war in Iraq.”

Powell, as secretary of state at the time, did not push for the Iraq War. He resisted it. But he himself was pushed into that speaking role by the warmakers who figured that someone with his prestige who clearly was not a flaming neocon would be more credible than one of their own. Powell was ill-served by the White House under which he was serving his country.

Regarding one of the main themes of the pro-war sales campaign—the infamous Iraqi weapons of mass destruction—Powell also was ill-served by the intelligence community. He did what he could to make that presentation to the Security Council accurate. He and his staff spent a weekend holed up at CIA headquarters, going over the draft speech line by line and quizzing relevant specialists about the validity of evidence contained in it. But a secretary of state can only do so much to overcome ground-level errors in evaluating reporting and the credibility of sources.

On the other major theme of the sales campaign—the supposed “alliance” between the Iraqi regime and Al Qaeda—the intelligence community, which understood that the alliance was a myth—served the secretary of state much better. If it were up to Powell, he would have said nothing about any such terrorist connection in the presentation to the Security Council. The few minutes on that subject near the end of the speech were the least he could get away with, in the face of enormous pressure from the White House and especially the vice president’s office—who had their own people at that weekend scrub session—to include that subject. The warmakers were leaning on the “alliance” notion to channel the American public’s post-9/11 mood of militancy into support for the Iraq War.

I was not part of preparations for the Security Council speech but at the time had an office in the same part of the CIA headquarters as where the scrub session was taking place. I was in my office catching up on my own work that weekend when I was visited by Barry Lowenkron, a former colleague who was then deputy director of the Policy Planning Staff at the State Department and one of the staffers who was assisting Powell with his preparations. He asked me to read a paper and give him my opinion on it. It was a script about the supposed Iraq-Al Qaeda connection that Vice President Dick Cheney’s staff had written and was pushing to include in the presentation to the Security Council.

The paper bore no resemblance to serious intelligence analysis. It was dozens of pages of artful spinning of a supposed terrorist conspiracy out of thin gossamer. It paid almost no attention to the credibility, or lack thereof, of its material. It did not consider alternative explanations and took no account of the known objectives and nature of the regime and terrorist group in question.

When I shared my appraisal with Lowenkron, he said he viewed the paper likewise. Powell evidently expressed the same opinion more forcefully. He was later reported to have thrown the script from the vice president’s office into the air as he said, “I’m not reading this. This is bullshit.”

Powell hoped to divert Bush from an ill-considered war through direct influence on the inside, especially in a private session he had with the president in August 2002, in which Powell recommended going to the United Nations. According to Bob Woodward, evidently channeling Powell as one of his anonymous sources, the secretary of state later worried that he had been too “timid” in addressing Bush about the war.

But Powell, as well as other subordinates of the president in the executive branch, had been put in an impossible situation by the fact that there never was any weighing by the national security policymaking machinery of the question, “Should the United States go to war in Iraq?” There was no National Security Council meeting, no policy options paper, or anything else that addressed that question. Thus, there was no clear decision point—as there should be in any major foreign policy decision—before which subordinates can and should give their unvarnished views of the options being considered, and after which the proper response is to salute and execute whatever option the president chooses. When Powell again gently raised, two months before the invasion, his concerns about the war, Bush said to him, “Are you with me on this? Time to put your uniform on.”

Critics who later said Powell should have resigned in protest rather than trying to influence the president from the inside overestimate the impact of any such resignation, even by someone with Powell’s stature. Resignations are too easily dismissed as disgruntlement over ordinary policy differences. It would be hard to come up with any example in American history of a senior resignation of protest making any significant difference in subsequent foreign policy. An instructive contemporary counterexample was in Britain, where Robin Cook, a senior member of the Labour Party and a former foreign secretary, resigned as a member of the cabinet and leader of the House of Commons because he opposed Prime Minister Tony Blair’s policy on Iraq. The resignation made no discernible difference in British policy.

Unfortunately, and inappropriately, many published memories of Powell will be forever soiled with the “blot” or “stain” of that infernal speech to the Security Council. Something similar happened to another public servant who died earlier this year: John Rizzo, a career CIA lawyer who served multiple stints as the agency’s acting general counsel and was denied the permanent position because of his association with the torture of detainees. There are important differences between his situation and Powell’s, including the fact that much of Powell’s illustrious career was a matter of public record whereas the public ordinarily knows little or nothing about what a counsel to an intelligence agency does. But a similarity is that the issues associated with Powell and Rizzo that later came to be seen as policy malfeasance did not originate with these men and went far beyond either one of them. The torture program was a malign by-product of the post-9/11 take-the-gloves-off mood that permeated the public and the government. Rather than being a prime mover of the program, Rizzo’s main effort regarding the torture was to ensure consistency with the Bush Justice Department’s judgments on the matter.

Another similarity is that the careers of the men involved went far, far beyond the controversial matters that each came to be associated with. In Rizzo’s case, this involved several decades of keeping the CIA’s operations on the legal straight and narrow.

But that is now how public remembrances go of people who, even just once in their lives, found themselves connected in some way to something infamous. Rizzo predicted that the first paragraph of his obituary would refer to the legal approval of the torture program. And so it has been, such as in a New York Times obituary that quotes Rizzo’s prediction and, in its first paragraph, proves it to be true.