Unfounded Alarm About Relations with Syria 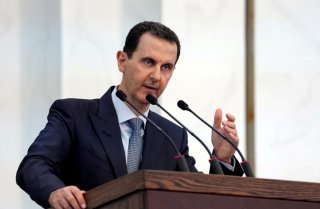 Arab states have been gradually restoring or expanding relations with the Syrian regime of Bashar al-Assad, and some commentators in the United States are very unhappy about that. A column by Josh Rogin in the Washington Post and an article by Charles Lister of the Middle East Institute, appearing within a day of each other, take nearly identical approaches to this subject. Each writer reviews and excoriates the Assad regime’s record of brutality—about which there can be no dispute—and criticizes the Biden administration for quietly acquiescing in the business that regional states have been doing with Syria, even though the United States is making no move of its own toward restoring relations with Damascus.

These critiques appear to rest on the misguided but all-too-familiar notion that talking or negotiating with another government inherently rewards that government. The word “reward” appears explicitly in Rogin’s piece. Diplomatic or commercial exchanges are by their nature not a reward that one party bestows on the other. They are two-way streets that involve the use of ordinary tools by each side to pursue its own interests and objectives.

Lister laments that any relationship with the Syria of Assad would “normalize the atrocities his regime has committed.” Normal diplomatic or commercial relations do no such thing. A normal relationship with the Chinese Communist Party’s regime, for example, does not “normalize” the atrocities that regime has committed in Tiananmen Square, Xinjiang, or elsewhere.

A recent development regarding relations with Syria, which probably was the immediate stimulus for Rogin and Lister to write their pieces, is a four-party deal in which natural gas from Egypt will be transported through Jordan and Syria to Lebanon. This arrangement will alleviate the fuel shortages that have produced long-lasting power blackouts, which in turn are part of the severe economic crisis that has befallen Lebanon and impoverished most of that country during the past year.

In mentioning the Egyptian gas deal, neither Rogin nor Lister notes the need it will serve or the interests of those most served—especially the badly stricken Lebanese public. Nor do they mention the disadvantages of allowing the Lebanese crisis to fester, including letting Hezbollah ingratiate itself with the Lebanese by trucking Iranian diesel fuel in from Syria.

Both commentators are fair enough to take note of views different from their own, but they never really refute those views. Thus, Rogin writes, “Proponents of normalization argue that 10 years of isolation and pressure on Assad have not produced any progress on a political settlement, while sanctions have exacerbated Syrians’ suffering. They also argue that Arab engagement can dilute Iranian power in Syria.” Rogin goes on to criticize the suffering related to the poor observance of deals the Assad regime has struck with local groups within Syria, but this does not contradict the ineffectiveness of a decade of isolation and pressure, or the extent to which foreign sanctions have added to the Syrians’ suffering. Nor does it address the implications of continued isolation of the Syrian regime for sustaining the influence of Iran—and of Russia—in Syria.

Lister notes how Jordanian king Abdullah advanced during his visit to Washington in July the idea that “to see behavioral change from Assad’s regime…we must define what that means and begin a ‘step-for-step’ process of tests and confidence-building measures with the regime to ascertain its willingness to act constructively.” Lister then seems to say that the Biden administration should have, but did not, respond to Abdullah with an “explicit rejection” of such a “regional, phased reengagement with Damascus.” But Lister never says what supposedly is wrong with Abdullah’s line of thinking. The Jordanian strategy, which evidently reflects much careful thought in Amman, is a realistic reflection of facts on the ground in Syria. Its incremental and conditional approach certainly has a better chance of affecting Syrian conduct for the better than the nothing-but-pressure method that already has demonstrated its ineffectiveness.

Jordan’s high stake in ameliorating the effects of the Syrian war makes it worth listening to. In addition to hosting 1.3 million Syrian refugees, Jordan has taken a substantial economic hit, including in its trade balance with Syria. For the United States, the stability and economic well-being of states such as Jordan and Lebanon are surely at least as important as entertaining the objectives of Syrian opposition groups.

Two big, glaring background facts go unmentioned by either Rogin or Lister. One is that the Assads have been in power in Syria for over half a century. The father, Hafez—who was at least as brutal as his son—came to power in a coup in 1970, and Bashar succeeded his father in 2000. During most of that half-century, Syria has had normal diplomatic and commercial relations with most of the world. Hyperbolic language that says normal relations between Syria and regional states now would be “disastrous” (Rogin) or “shattering international norms” (Lister) is thus not convincing.

Another background fact is that Assad’s regime, with the aid of its Iranian and especially Russian allies, has rebounded from earlier setbacks in the civil war and has secured control over most of Syria in a way that seems very unlikely to be reversed. Apparently content for now not to have control over some of Syria’s borders and airspace, the Damascus regime currently governs two-thirds of Syria’s territory, a similar proportion of its resident population, and all of its major cities. The regime is not going anywhere and cannot be wished away, despite the brutality.

It is not evident what Rogin or Lister hopes to accomplish with a policy of unrelenting pressure and isolation. They want the United States to be diplomatically active in an international political process on Syria within the framework of United Nations Security Council Resolution 2254, and indeed it should be. But how discouraging regional states such as Egypt, Jordan, Lebanon, and the Persian Gulf monarchies from doing any business with the Syrian government would facilitate that process is not at all apparent. Resolution 2254 itself calls for the process to involve the Syrian government. A policy of unremitting ostracism would become just another feckless example of making a statement about a regime the United States doesn’t like—an expression of disgust that does not offer any practical progress.

The Biden administration does not need to be in any hurry to normalize its own relations with Damascus, and it evidently is not. But there is no good reason to pressure the neighboring states not to do so. In the Middle East as in other regions, normal and cooperative relations among neighbors are generally more in U.S. interests than confrontation is. Such relations improve the possibilities of progress on border-spanning matters such as refugees and humanitarian aid, reduce the chance of local conflicts spinning out of control, reduce local regimes’ reliance on outside powers, and reduce the opportunities for extremists to exploit conflicts.