Western Sahara and the Price of Comforting Israel 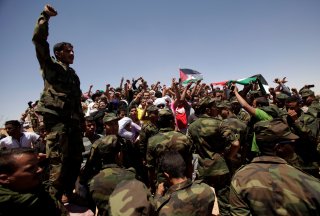 For Americans, the Western Sahara is a faraway land about which they know little. There is no good reason for the United States to separate itself from the mainstream of international opinion about the long-running conflict in that territory. There is even less reason for the United States to support the claim of a neighboring state that, enjoying local military dominance, wants to annex the territory. Yet that is what the administration of Donald Trump, acting very much alone, has done by recognizing Moroccan sovereignty over the Western Sahara.

A cease-fire in 1991 left Morocco in control of more than three-fourths of the Western Sahara. The Moroccans constructed a long earthen berm to separate what they control—which includes the territory’s economically important phosphate deposits—from the remaining desert that is left to the Polisario. The most significant breach of the cease-fire occurred just last month, touched off by Moroccan military movements near a border post that followed nonviolent protests obstructing truck traffic to Mauritania.

Various peace efforts through the years, including one led by former U.S. Secretary of State James Baker acting as a United Nations envoy, have centered on the concept of self-determination for the Sahrawi people, with a referendum to determine the will of those people. Disagreement over who ought to be on the voter rolls has prevented any referendum from being held.

The prevailing international perspective toward the conflict is very much in line with the concept of Sahrawi self-determination, and not at all in line with Moroccan annexation. The United Nations considers the Western Sahara to be a non-self-governing territory and the Polisario Front to be the “sole legitimate representative” of the Sahrawi people. Forty countries recognize the “Sahrawi Arab Democratic Republic” that the Polisario Front declared in 1976. SADR is a full member of the African Union. Morocco has not received comparable support for its claims from the Arab League, which has offered only a vague statement about respecting Moroccan territorial sovereignty.

The Trump administration’s move does nothing for the people of the Western Sahara, nothing for the cause of self-determination, and nothing for efforts to resolve the Western Sahara dispute. It can only make resolution of the conflict less, not more, likely than before—especially coming amid a breakdown of the cease-fire between Morocco and the Polisario. It also increases U.S. isolation on yet another international issue, identifying the United States with a might-makes-right approach to territorial control.

And what did the administration get in return for incurring these costs? Nothing for the United States. Instead, the deal reached with the Moroccan regime of King Mohammed VI was part of the administration’s campaign on behalf of the Israeli government of Benjamin Netanyahu to get Arab states to upgrade their relations with Israel. It is transactional dealing in support of Likud.

The upgrade deals that the administration has struck with the United Arab Emirates, Bahrain, Sudan, and now Morocco are not “peace” agreements, much less the “breakthroughs” that the administration likes to describe them as. None of these states was at war with Israel. Instead, they already had extensive cooperation with Israel, including on security and defense matters. Morocco even had previously exchanged diplomatic liaison offices with Israel following the Oslo Accords of the 1990s, although those offices were closed after a new Palestinian uprising in 2000. This month’s deal merely reopens those liaison offices.

Netanyahu’s government strongly wants more extensive relations with Arab states as a way of having its cake and eating it too—that is, as a way of losing its pariah status while continuing its occupation of Palestinian territory. Far from advancing peace, this process sets back any prospects for peace. It reduces further any incentive for the Netanyahu government to make the sort of policy changes necessary for resolving the conflict with the Palestinians.

Meanwhile, the Trump administration has paid other peace-eroding prices in its campaign on behalf of the Israeli government. F-35 stealth jets and other advanced military hardware were part of the price paid to the UAE—a transaction that, thanks partly to Trump’s veto threat, evidently will be completed despite significant congressional opposition. The deal risks stoking an arms race in the Persian Gulf, and at a minimum intensifies the lines of conflict in that region. It also provides advanced weapons to a regime that has used the military aircraft it already has for such destabilizing activities as intervening in Libya’s civil war and adding significantly to the death and destruction there.

The Trump administration’s motives in all this clearly have to do with catering to those domestic political elements, consisting mainly of the Christian evangelical part of Trump’s base, that see as good anything that conforms with the wishes of the Israeli government. More personal urges may be in play as well, especially for Trump’s son-in-law and adviser Jared Kushner, who reportedly was in the middle of the deal-making with Morocco.

Transactional diplomacy in which prices are paid is not inherently bad. Countries do it all the time. But when the United States pays such a price, it ought to be in return for something in U.S. interests, or in the more general interest of peace. It ought not to serve instead the territorial ambitions of a foreign state.