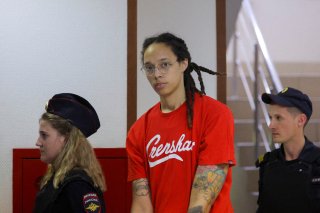 A Russian court on Thursday sentenced WNBA star Brittney Griner to nine and a half years in prison—close to the maximum possible—for bringing less than a gram of cannabis oil into the country, according to the Washington Post.

Griner, a Houston native who plays professional basketball for the Phoenix Mercury, has a right to appeal.

The two-time Olympic gold medalist was returning to Russia on February 17 for the WNBA’s offseason when she was detained at Sheremetyevo International Airport after the Russian Federal Customs Service claimed to have found vape cartridges containing the marijuana concentrate hashish oil in her luggage.

During her testimony, Griner described making a grueling thirteen-hour flight to Moscow from Arizona while recovering from Covid-19. She asserted that she does not know how the cannabis oil, for which she had a doctor's prescription, ended up in her bag, explaining that she had packed in haste while under great stress.

The judge, however, found that Griner had criminal intent and said she was guilty of smuggling and storing illegal drugs. In addition to the jail time, she was fined 1 million rubles, which is roughly $16,500.

ABC News reported that Griner’s attorneys, Marina Blagovolina and Alexander Boykov, told reporters outside the Moscow courthouse that they plan to file an appeal.

“She’s very upset. Very upset, very stressed,” Blagovolina said of Griner. “She can hardly talk, honestly, so it’s [a] difficult time for her.”

Meanwhile, President Joe Biden said the sentence handed down to Griner was “unacceptable.”

“Today, American citizen Brittney Griner received a prison sentence that is one more reminder of what the world already knew: Russia is wrongfully detaining Brittney. It’s unacceptable, and I call on Russia to release her immediately so she can be with her wife, loved ones, friends, and teammates,” he said in a statement.

“My administration will continue to work tirelessly and pursue every possible avenue to bring Brittney and Paul Whelan home safely as soon as possible,” he continued.

Whelan, a former U.S. Marine and corporate security executive from Michigan, was sentenced to sixteen years in prison on espionage charges in 2020. He and his family have vigorously asserted his innocence.

Elizabeth Rood, charge d'affaires of the U.S. Embassy in Russia, told reporters that “this is a miscarriage of justice.”

“The U.S. Department of State has determined that Ms. Griner was wrongfully detained. Nothing in today's decision changes that determination,” she added.

WNBA Commissioner Cathy Engelbert and NBA Commissioner Adam Silver said in a joint statement that “today's sentencing is unjustified and unfortunate, but not unexpected.”

“The WNBA and NBA's commitment to her safe return has not wavered and it is our hope that we are near the end of this process of finally bringing BG home to the United States,” they continued.