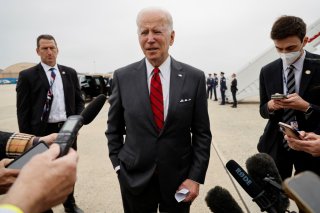 Late last week at the White House, President Joe Biden confirmed that he would decide on student loan forgiveness within weeks.

“I am considering dealing with some [student] debt reduction,” he said. “I am not considering $50,000 debt reduction. But I’m in the process of taking a hard look at whether or not there will be additional debt forgiveness.”

According to a report by the Washington Post, White House aides are currently deliberating on what the scope of a broad student loan cancellation should be—and it appears that wiping out any amount up to $50,000 could still be on the table.

“Some of the ideas being floated include limiting the relief to those earning less than either $125,000 or $150,000,” CNBC noted. “Some people are pushing student debt forgiveness to be targeted at those with income below certain levels. It remains unclear what the cap, if any, would be.”

According to an analysis by higher-education expert Mark Kantrowitz, roughly two-thirds of student loan borrowers earn less than $100,000 a year.

According to a recent study by the Federal Reserve Bank of New York, a decision to cancel $50,000 for all borrowers would cost about $900 billion and leave 80 percent of all federal student loan holders with a balance of zero. And if Biden remains true to his campaign promise of forgiving $10,000 per borrower, that would cost $321 billion and eliminate the entire balance of approximately 12 million people. However, 70 percent of borrowers would still have debt.

Senate Majority Leader Chuck Schumer (D-NY) seemed confident last week that the president would sign off on wiping out up to $50,000 in student loan debt.

“I’ll keep urging the president to take this important step. And I say to my colleagues, I think the president is moving in our direction,” he said on the Senate floor.

“My talks with him and his staff have been very fruitful over the last little while and I am hopeful that he will do the right thing. We’re getting closer,” he continued.

Meanwhile, per Insider, Rep. Alexandria Ocasio-Cortez (D-NY) asserted that student-loan forgiveness is good for all Americans—even those who have already settled their loan debt.

“Maybe student loan forgiveness doesn't impact you,” she wrote in an Instagram story. “That doesn't make it bad. I am sure there are certainly other things that student loan borrowers' taxes pay for. We can do good things and reject the scarcity mindset that says doing something good for someone else comes at the cost of something for ourselves.”

She concluded that “it all comes around. It's okay. We can support things we won't directly benefit from.”