2000: The Election That Was Decided By The Supreme Court 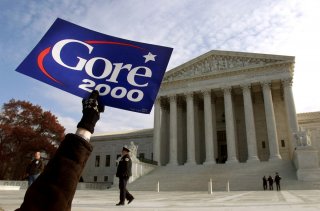 Former Vice President Al Gore evoked the ghosts of the 2000 election -- when he battled Republican nominee George W. Bush for the White House -- as reporters asked him to comment on the state of the 2020 presidential race between Democratic nominee Joe Biden and President Donald Trump.

“First of all, this is a completely different election from the one 20 years ago,” Gore told NBC News, saying that Biden “has multiple pathways to secure his victory” over Trump.

Unlike Biden, Gore only had one pathway to land a spot in the Oval Office, as the race all came down to Florida’s then-21 electoral votes. Gore, like 2016 Democratic presidential nominee Hillary Clinton, won the popular vote and eventually lost the Electoral College vote in a brutal defeat against Bush.

After a five-week legal blitz that virtually ended in the Supreme Court, Bush was named the next president of the United States.

But as more votes were counted, Bush edged into the lead later in the night, prompting networks to renounce their projections and name Florida as “undecided.” Then they called the Sunshine State for Bush, which was followed by a private concession by Gore that was itself soon rescinded. Bush’s announcement came as roughly 15 percent more votes needed to be counted -- and they were from predominantly blue counties. As more votes were tallied, Gore narrowed Bush’s lead to less than 2,000 votes, which pushed for an automatic recount in the state as the margin was so tight. Overall, the results were just too close to call on election night.

With Bush at 246 electoral votes and Gore at 266, the Florida results likely determined the outcome of the 2000 presidential election.

As the country awaited the results, lawyers from both parties swarmed the Sunshine State, with Gore’s team asking for a hand recount. The ballots themselves became an issue, as the Democratic nominee argued that some of the counties’ ballots were confusing to interpret, surfacing the “butterfly ballot” discrepancy where Gore believed voters accidentally voted for Pat Buchanan, a third-party candidate due to the design of the ballot.

There were also contentions about the card-punch system that some counties used, which required voters to puncture a hole for the ticket they had supported, but that left some cards with “hanging chads,” or pieces of paper dangling from their ballots.

After a rapid-fire of legal efforts from both parties -- similar to litigation efforts by Trump’s campaign -- the Florida Supreme Court officially requested a recount of votes in Florida’s 67 counties, which Bush then appealed.

The case then raced through the state-level court and headed to the US Supreme Court.

In one of the most controversial decisions that the Supreme Court concluded, the case ended up with a 5 to 4 ruling for Bush on Dec. 12, 2000, a move that puzzled reporters as some said they ruled in favor of Bush, while others said the same about Gore.

“Among the many bad things about Bush v. Gore, one of the worst is it takes, like, till page seven until you find out the outcome of the case,” Ron Klain, a Gore aide, told the Atlantic. “It’s a horribly written opinion. So I’m reading along, reading along, reading along. I have Gore on the phone, people are bringing me pages one page at a time. Finally, we hit the seventh page.”

What Can This Tell Us About the 2020 Presidential Race?

The GOP effort in 2000 broadcasted massive talent within the party that likely helped Bush land a White House win.

But the state of the 2020 race is “completely different,” as Gore stated, than two decades ago. Biden has several leads in battleground states as of Friday and most likely will nix Trump from the White House in January.

Although there’s much legal turmoil, the president is behind in a number of states -- not just one like in 2000. He is also alleging that there have been widespread accounts of voter fraud in these uncalled states. He and his legal team will need to produce solid evidence of it.