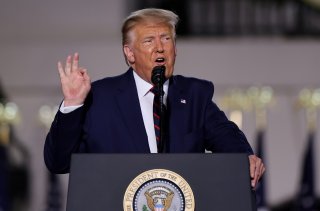 At a political convention, the leading party’s candidate delivers a message to voters about why they should back their ticket come election day. Conventions formally select the party’s nominee and feature several prominent political figures who support the candidate, advocating for the party’s ideals, principles and goals for the next four years if elected.

Some conventions have been notable enough to unite a party to support a particular candidate. Others, however, are labeled total busts for a number of reasons. And on some occasions, we have even seen violence and riots.

In 1992, Patrick Buchanan plunged the Republican convention by announcing there was a “cultural war” with Democrats, as the party supported abortion, radical feminism and gay rights.

“The agenda Clinton and Clinton would impose on America — abortion on demand, a litmus test for the Supreme Court, homosexual rights, discrimination against religious schools, women in combat — that’s change, all right,” Buchanan, a conservative commentator, said. “But it is not the kind of change America wants.”

Buchanan went on to criminalize and reject Democratic ideals and centered his convention speech on issues like abortion, the “homosexual rights movement,” religion and women in society. Other speakers at the convention echoed Buchanan’s concerns but in a less aggressive manner.

Former President George H.W. Bush lost the election, as some supporters attributed the defeat to convention speeches like Buchanan that focused on those social movements. Buchanan’s tone on the convention stage set a precedent that, in fact, lowered the standards of those types of speeches. His words were effective as they made a memorable impact on viewers, but he established a new kind of political rhetoric that many say encouraged conflict and polarization.

Hosted in Miami in 1972, the Democratic convention was perhaps the longest, most drawn-out event in convention history.

Former Sen. George McGovern (D-S.D.) was selected to lead the Democrats to take control of the White House — which he failed to do — but didn’t get to formally accept his presidential nomination until 3 a.m. on the night of the convention.

McGovern — who represented anti-Vietnam War and black civil rights activists — inherited new party rules during the election, enabling him to gain traction in the spring primaries and caucuses, granting him the party’s nomination. His candidacy — similar to that of Trump’s — initiated “Stop McGovern” movements that attempted to block McGovern from office. At the roll call vote, nearly 40 percent of delegates didn’t vote for McGovern, diminishing his chances of winning that November.

At the convention, where the party formally nominated McGovern as the Democratic presidential candidate and former Senator Thomas Eagleton of Missouri as his running mate, McGovern’s speech was delayed as other contenders for the vice-presidential spot refused to drop out of the running. Delegates also poked fun at the process, nominating Martha Mitchell (the disturbed wife of former President Richard Nixon’s attorney general), Archie Bunker, the Berrigan Brothers, Mao Tse-tung and others to be his vice president.

The lack of compromise and overall mockery forced hours of speeches and a lengthy roll call on Americans, stalling McGovern’s speech until 3 a.m. At that time, when the candidate advocated for his “Come Home America” message, viewers had already left.

“This most unusual of conventions,” The New York Times dubbed it.

The McGovern-Eagleton ticket lost in a brutal defeat, where they won support from just one state.

Labeled as a “big Democratic shebang” to historians, the convention in 1968 marked a time when the party carried a seething divide because of the Vietnam War. Anger within the party rampaged streets across the country, and later reached Chicago where the convention was being hosted.

Chaos erupted both inside and outside the convention hall as Mayor Richard Daley of Chicago shouted anti-Semitic comments at Connecticut Senator Abraham Ribicoff after the senator balked at the city’s police. On the streets surrounding the convention, anti-war protestors flooded the city with riots and social unrest. Chicago police officers beat the protesters, and Daley called on the National Guard to come with flamethrowers and bazookas to tame the discord.

Dubbed as “a police riot,” reporters covered more than 15 minutes of complete uncontrol, as protesters and law enforcement went head-to-head in the streets.

Violence shaped the Democratic convention for former Vice President Hubert Humphrey, as the party couldn’t come together on a united platform. Humphrey lost to Nixon in a massive defeat, where Nixon firmly called on restoring “law and order” during his campaign. Americans feared this new wave of violent protesters, prompting Nixon to tap into establishing a platform that would bring order and social rest back to the country.

At a time when the country experienced an economic crisis that plagued the US, Americans needed to be instilled with hope and energy about the future.

Incumbent President Herbert Hoover received the nomination for the Republican party that year, a candidacy that proved to be boring and lacked substance, which ultimately forced him to lose the presidential election. America was under the leadership of Hoover during a period of the dwindling economy, so it was expected that he and other GOP leaders would speak of the country’s path to economic recovery at the party’s convention.

That didn’t happen. Republican leaders refrained from discussing the economic turmoil, and instead centralized the convention’s message on the repeal of Prohibition, an issue that didn’t hold significant importance to Americans. Hoover and his campaign avoided the tough topics and focused on his reelection bid, rather than tackling the deepening problems within the country that existed at the time.

Held in Chicago, the convention was said to be “singularly colorless,” according to news reporters. Viewers described it as being dull and bland, despite it being a massive media event that was featured on national radio. Hoover and his team were lifeless and unexciting, forcing voters to stray away from his campaign and block his reelection bid.

Three years after the Civil War, the Democratic convention in 1868 boasted white supremacy and destruction of the federal government. Chaotic is a generous term to describe the convention, as the party’s official nominee didn’t even want to serve as commander-in-chief.

On the eve of the convention, Frank Blair, a politician during that era, released a public letter that established the convention’s slogan, “This is a white man’s country. Let a white man rule.” Blair condemned Republicans for freeing a “semi-barbarous race of blacks” that “subject the white women to their unbridled lust.” One Democratic strategist told Politico that the Democrats’ only chance of winning the election was to energize “the aversion with which the masses contemplate the equality of the Negro.”

The convention dripped in racial rhetoric, bashing Republicans who had freed the slaves and pushing for an end to black rights, taxation and government bureaucracy. Democrats also targeted upper-class voters by “calling for the repayment of the national debt in depreciated currency.” New York conservative and the convention’s chairman Horatio Seymour received the party’s nomination — a position he loathed to have. Despite his refusal to serve, the party nominated him anyway, acting as the leader of a party that discouraged black rights, advocated for the wrecking of the federal government and welcomed white supremacy.