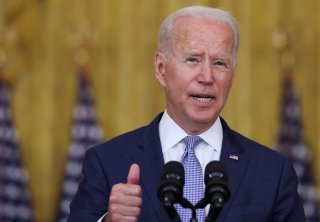 For the past several months, the consumer price index, the primary indicator of inflation in the United States, has been steadily trending upward—and there appears to be no end in sight.

As inflation continues on its current trajectory throughout this year, Social Security’s cost of living adjustment (COLA) for 2022 is expected to receive a major boost as well. COLA is calculated each year based on the Consumer Price Index for Urban Wage Earners and Clerical Workers, or CPI-W.

Just how much? According to the Senior Citizens League, a nonpartisan senior group, the data now points toward a possible 6.2 percent cost-of-living adjustment for Social Security recipients for 2022. This new figure is up from the 6.1 percent estimate that the group projected last month—and it would be the largest increase in nearly forty years.

“The estimate is significant because the COLA is based on the average of the July, August, and September CPI data,” Mary Johnson, a Social Security policy analyst for the Senior Citizens League, said in a statement.

For comparison, in 2021, the Social Security COLA was only 1.3 percent. That amounted to a roughly $20 extra monthly payment for the average retiree.

The 6.2 percent bump may be music to the ears of many Social Security recipients, but according to the financial site Motley Fool, the program has been stingy on its adjustments for far too many years.

“Seniors on Social Security are entitled to an annual raise known as a cost-of-living adjustment or COLA. The purpose of COLAs is to help seniors maintain their buying power when living expenses inevitably rise,” the expert wrote.

“But over the past twelve years, Social Security COLAs have averaged just under 1.4 percent. That’s hardly been enough to keep pace with inflation,” she added.

With this in mind, the expert noted that younger people should save more during their working years so that they are “less reliant on Social Security.” According to recent data released by the Social Security Administration (SSA), approximately 20 percent of married couples and 40 percent of singles receive at least 90 percent of their income from Social Security benefits.

“Unfortunately, Social Security isn’t perfect, and it’s seniors who have been paying the price for a long time. It’s important that current workers recognize the program’s limitations and take steps to save aggressively for retirement on their own. Consistently funding an IRA or 401(k) plan could make it so that seniors are less reliant on Social Security—and more financially stable once their time in the workforce comes to an end,” she advises.