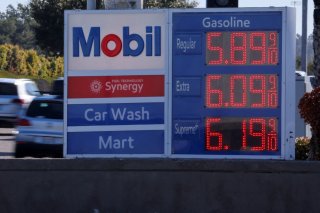 After a minor dip at the end of 2021, gas prices have been rising steadily so far this year, and have seen another wave of increases in the last week, following Russia’s invasion of Ukraine. The war, which is Europe’s biggest conflict since World War II, has directly raised oil prices and, therefore, higher prices for customers at the pump in the United States.

And in one major city, prices have hit a new milestone.

According to GasBuddy, San Francisco has become the first major U.S. city to hit an average gas price over $5 a gallon. The same city last fall had broken a record with an average price of $4.73 per gallon, but prices have risen since.

The national average of $3.70 per gallon is much lower but is still higher than it was for most of last year.

“San Francisco just made history as the first ever U.S. city to reach an average of $5 gas,” Patrick De Haan, head of petroleum analysis for GasBuddy, said in the company’s blog post. “And unfortunately, this record is likely just the beginning of a larger trend of price spikes to come to California and the entire country. While Bay Area prices might be leading the way for now, there’s a possibility here for the entire state of California to follow suit, with gas prices potentially rising over the $5 mark this spring.”

KTLA, meanwhile, reported that the average price has reached $5 in the Los Angeles area.

Why are gas prices so high in California? A lot of it is gas prices, which are higher there than in most states, according to a recent Los Angeles Times analysis.

As for rising gas prices in general, they’re connected largely to the global price of oil, which has been rising for most of the past year. Oil and gasoline prices both crashed in 2020, due to the Covid-19 pandemic and the sudden collapse in demand for fuel. However, demand has been coming back slowly ever since, with gas prices rising along with it.

Californians, among other options, can get around gas prices by driving electric cars. Back in 2020, Gov. Gavin Newsom announced that the state would phase out gas-powered cars, with only new zero-emission vehicles allowed to be purchased by 2035.

“This is the most impactful step our state can take to fight climate change,” the governor said at the time. “For too many decades, we have allowed cars to pollute the air that our children and families breathe. Californians shouldn’t have to worry if our cars are giving our kids asthma. Our cars shouldn’t make wildfires worse – and create more days filled with smoky air. Cars shouldn’t melt glaciers or raise sea levels threatening our cherished beaches and coastlines.”