Antifa.com Is Redirecting to the White House (No, Biden Isn't Antifa) 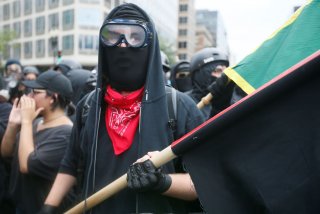 On Wednesday, when Joseph Biden was inaugurated as the 46th president of the United States, it also meant that the White House website, at WhiteHouse.gov, turned over from Donald Trump’s control to Biden’s control. The site is now adorned with photos of Biden and Vice President Kamala Harris, while also including sections for Biden’s different priorities as president. It also added such features as dark mode, and even had some inside jokes inside its code, CNN noticed on Wednesday.

Also, it turns out, the website antifa.com redirects there.

As was pointed out Wednesday by several media outlets, including the West Virginia local news website WTRF, when one enters the URL antifa.com, it redirects them to WhiteHouse.gov. Fox News, over footage of Antifa destruction in Portland, shared the redirect story Thursday morning.

Does this mean the new administration has some secret affinity for anarchist, anti-fascist groups, one laid bare by a secret URL?

No, it does not. All it means is that some unknown party bought the antifa.com URL and arranged for it to be redirected to the White House website, which isn’t something that would have required the cooperation of those running the White House website. If someone owns a website, they can redirect it to another website if that’s what they want to do.

It’s an old, old trick, one that’s been used by trolls of all political stripes for many years. At some point in the Trump presidency, someone bought the URL loser.com, and redirected it to Donald Trump’s Wikipedia page. Even the antifa.com URL, prior to Wednesday, redirected to Biden’s campaign website, leading to lots of bad-faith political commentary throughout the campaign.

“So whoever owns antifa.com is redirecting it to our website as a troll. . . . The VP very obviously has/wants nothing to do with fringe groups,” Biden digital director Rob Flaherty said, per the local news website.

Indeed, activists thought to be associated with Antifa, in Portland, marked Biden’s first day in office not by pledging allegiance to the new president, but by vandalizing the Democratic Party headquarters in that city.

“We don’t want Biden. We want revenge for police murders, imperialist wars, and fascist massacres,” read a banner the activists marched under in Portland, Reuters reported. Then events in Portland led to eight arrests.

Antifa is a decentralized network of anti-fascist groups, sometimes associated with vandalism and violence, which sometimes manifests itself in brawls on the streets with neofascist groups, most often in cities like Portland. They have also emerged, in recent years, as a frequent bogeyman by the political right, which manifested itself in conspiracy theories that Antifa was in fact responsible for the Jan. 6 capitol insurrection.