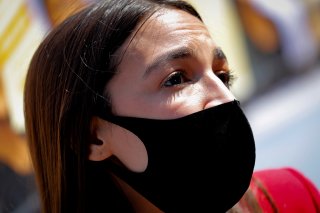 In an emotional speech on the House floor on Thursday, Rep. Alexandria Ocasio-Cortez (D-N.Y.) slammed Rep. Ted Yoho (R-Fla.) for his profane and sexist remarks on the Capitol steps, emphasizing this is a “pattern of an attitude” against women.

“I was walking up the steps of the Capitol when Representative Yoho, um, suddenly turned a corner, um, and he was accompanied by Representative Roger Williams and accosted me on the steps, right here, in front of our nation’s Capitol,” Ocasio-Cortez said.

The congresswoman added that she was “minding my own businesses,” but Yoho called her “‘disgusting,’” “‘crazy’” and “‘out of my mind.’”

“In front of reporters, Representative Yoho called me, and I quote, ‘a fucking bitch,’” she said.

“These are the words that Representative Yoho levied against a congresswoman,” Ocasio-Cortez said. “The congresswoman that not only represents New York’s 14th congressional district, but every congresswoman and every woman in this country, because all of us have had to deal with this in some form, some way, some shape at some point in our lives.”

Ocasio-Cortez said his words weren’t “deeply hurtful or piercing,” because she’s experienced this type of behavior during her time as a working-class citizen waiting tables, taking public transportation and living in New York City.

Instead, the New York congresswoman was rising to address the “lack of impunity, of accepting of violence and violent language against women.”

On Wednesday, Yoho took to the House floor to apologize for the incident and noted he didn’t say the “offensive name-calling words attributed” to him.

"It is true that we disagree on policies and visions for America, but that does not mean we should be disrespectful. Having been married for 45 years with two daughters, I'm very cognizant of my language," Yoho said.

Ocasio-Cortez deemed his apology as an “excuse” and said he has “no remorse.”

"Mr. Yoho mentioned that he has a wife and two daughters. I am two years younger than Mr. Yoho's youngest daughter. I am someone's daughter, too. My father, thankfully, is not alive to see how Mr. Yoho treated his daughter,” she said. “My mother got to see Mr. Yoho's disrespect on the floor of this House towards me on television, and I am here because I have to show my parents that I am their daughter and that they did not raise me to accept abuse from men."