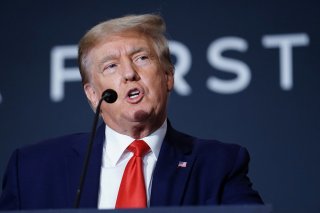 “[Griner] knew you don’t go in there loaded up with drugs, and she admitted it,” Trump said on the Clay Travis & Buck Sexton Show on Friday.

“I assume she admitted it without too much force because it is what it is, and it certainly doesn’t seem like a very good trade, does it? He’s absolutely one of the worst in the world, and he’s gonna be given his freedom because a potentially spoiled person goes into Russia loaded up with drugs,” he continued.

“She went in there loaded up with drugs into a hostile territory where they’re very vigilant about drugs. They don’t like drugs. And she got caught. And now we’re supposed to get her out—and she makes, you know, a lot of money, I guess. We’re supposed to get her out for an absolute killer and one of the biggest arms dealers in the world. Killed many Americans. Killed many people,” Trump added.

Griner, a two-time Olympic gold medalist, was detained at Sheremetyevo International Airport on February 17 after the Russian Federal Customs Service claimed to have found vaporizer cartridges containing the marijuana concentrate hashish oil in her luggage. During her testimony last week, Griner described making a grueling thirteen-hour flight to Moscow from Arizona while recovering from Covid. She said that she does not know how the cannabis oil, for which she had a doctor's prescription, ended up in her bag, explaining that she had packed in haste while under great stress.

She faces up to ten years in prison if convicted of transporting drugs.

Last Wednesday, Secretary of State Antony Blinken acknowledged that the United States presented a “substantial proposal” to Russia “weeks ago” for the two Americans, both of whom are classified as “wrongfully detained” by the Biden administration. He added that President Biden was “directly involved” in the talks and signed off on the proposal.

Blinken said he spoke to Russian foreign minister Sergey Lavrov by phone on Friday but did not provide details of Lavrov’s response, per the Associated Press.

“I urged Foreign Minister Lavrov to move forward with that proposal,” Blinken said. “I can't give you an assessment of whether that is any more or less likely.”

In a statement, the Russian Foreign Ministry said Lavrov “strongly suggested” to Blinken “returning to a professional dialogue in the mode of quiet diplomacy” on any efforts at American detainees’ release.