Bad News: The IRS Has Flagged Over 5 Million Tax Refunds for Fraud 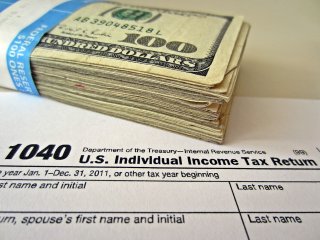 A lot of Americans are still waiting for their tax refunds, and it turns out there’s a good reason for that.

“The IRS’s fraud filters flagged 5.2 million refunds in 2020,” the Taxpayers’ Advocate office said this week. “It released most after verifying the taxpayer’s identity or income and withholding (i.e., most were legitimate refund claims).” “In 2020” refers to 2020 tax returns, which are being processed currently.

Of those, about 1.9 million were flagged for “identity screening,” while the remaining were checked for income verification. Most of the returns flagged turn out to be legitimate, and end up leading to the taxpayer receiving their refund as planned.

That number is fifty percent more than the number for 2019, per CNBC.

The report added that the coronavirus pandemic likely committed to further delays, as did a lack of resources on the part of the agency.

“We understand the concerns of how refund delays can impact taxpayers, and we continue to collaborate with internal and external partners to refine and automate refund fraud filters where appropriate,” the IRS told Congress in response to a report last year, per CNBC.

Earlier this week, a House committee, the Subcommittee on Oversight and Subcommittee on Select Revenue Measures, held a hearing on the administration’s tax compliance agenda, and Deputy Assistant Secretary for Tax Policy Mark J. Mazur testified before the committee.

“Tax non-compliance has serious consequences for the majority of Americans who pay their taxes in full each year.,” Mazur testified before the committee. “A larger tax gap generates the following results: higher tax rates elsewhere in the system, lower revenues to fund the nation’s fiscal priorities, or higher budget deficits and larger amounts of federal debt. Extensive and persistent non-compliance also undermines confidence in the fairness of our tax system.”

Mazur went on to blame the tax gap on “underinvestment” in the IRS by the government.

“The IRS budget has been reduced by about twenty percent in real terms over the last decade,” he said. “Since the IRS budget largely covers personnel, staffing dropped and there was a steep decline in audit rates. The IRS has had insufficient resources to meet enforcement and administrative challenges and to deliver customer service to taxpayers.”

The IRS, meanwhile, will be sending out the payments from the expanded child tax credit, beginning in mid-July. The IRS traditionally has not sent out recurring payments, but IRS Commissioner Charles Rettig told Congress earlier this spring that the agency will be ready to distribute those payments on time.