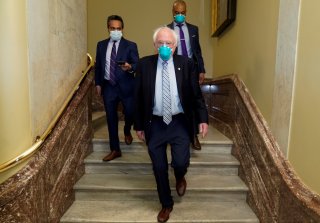 Sen. Sanders coined his popularity within the progressive movement during his Democratic primary runs in 2016 and 2020, where he even grappled the frontrunner spot at one point against Biden as he touted the label of being a Democratic Socialist. Progressive ideology has also fizzled into other well-known lawmakers on Capitol Hill, including Democratic Reps. Alexandria Ocasio-Cortez (N.Y.) and Ilhan Omar (Minn.), both members of “the Squad.”

“I would like to see strong progressives in the administration who are going to stand up for the working families of this country, who believe that healthcare is a human right, who believe we’ve got to make sure that public colleges and universities are tuition-free and that we have to be aggressive on issues like climate change, racial injustice, immigration reform,” he added.

Experts believe that Biden may have no other choice but to pump progressives into his Cabinet.

“I think Biden has no choice but to add progressives to his Cabinet,” John Feehery, Republican strategist and columnist at The Hill, said. “The Democrats are dominated by progressives and he can’t afford to ignore them.”

In talks over Biden’s potential picks for attorney general, Sanders also noted that U.S. Circuit Court Judge Merrick Garland, the current leading contender for the position and President Barack Obama’s deflected Supreme Court nominee in 2016, wasn’t progressive enough for the party’s far left, but declined to comment any further “on Biden’s particular appointees.” Garland is among three people who reportedly loom in discussions over the attorney general spot. The others are Sen. Doug Jones (D-Ala.), who lost reelection, and former deputy attorney general Sally Yates.

With roughly three weeks until inauguration day, there are few cabinet-level positions still available under Biden’s incoming administration, as the only remaining jobs are commerce secretary, labor secretary and attorney general.