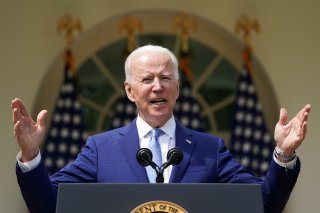 Marijuana law reform has been one of the key issues that the left flank of the Democratic coalition has not had any success in achieving during the first two years of the Biden administration.

However, that changed in a big way on Thursday. President Joe Biden announced that he would be pardoning all prior federal offenses for simple marijuana possession while urging governors to do the same at the state level. He also took a step towards ending marijuana’s status as a Schedule 1 drug, which places it on the same level as harder drugs like heroin.

“Sending people to prison for possessing marijuana has upended too many lives and incarcerated people for conduct that many states no longer prohibited. Criminal records for marijuana possession have also imposed needless barriers to employment, housing, and educational opportunities,” Biden said in his statement. “And while white and Black and brown people use marijuana at similar rates, Black and brown people have been arrested, prosecuted, and convicted at disproportionate rates.”

“There are thousands of people who have prior Federal convictions for marijuana possession, who may be denied employment, housing, or educational opportunities as a result,” the president added. "My action will help relieve the collateral consequences arising from these convictions."

So what will be the effects of this move?

In response to a reporter who noted that there are “essentially no federal prisoners currently serving time for simple possession of marijuana,” White House Chief of Staff Ron Klain replied: “As the President said in his statement, the impact of the pardon is to remove the consequences of prior convictions -- barriers to employment, benefits, housing, etc.”

As for state-level convictions, Biden has “urged” governors to issue pardons as well, although the president doesn’t have the power to do more than that. It would appear likely that some governors will go along with Biden’s request, while others will not.

As for the Schedule 1 change, that could take longer.

“Federal law currently classifies marijuana in Schedule I of the Controlled Substances Act, the classification meant for the most dangerous substances.  This is the same schedule as for heroin and LSD, and even higher than the classification of fentanyl and methamphetamine – the drugs that are driving our overdose epidemic,” Biden said.

Biden added that he believes that “federal and state regulation of marijuana changes, important limitations on trafficking, marketing, and under-age sales should stay in place.”

The political effects are another question, as Republicans may seek to tar Biden and Democrats as “soft on crime” for the move. Some in the GOP, such as Sen. Tom Cotton (R-AR) have already gone that route.