Biden, Putin Meet, Complain About Each Other 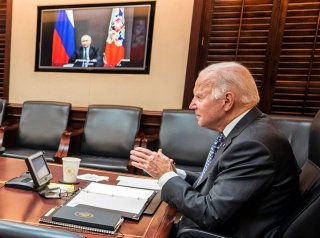 President Joe Biden and Russian president Vladimir Putin outlined their positions on the ongoing Russo-Ukrainian crisis during a virtual meeting on Tuesday. The two political leaders largely steered clear of confrontation. Instead, they voiced their concerns about the situation in Eastern Europe to one another.

Tensions have risen in eastern Ukraine after Russian military forces, numbering as many as 175,000, have taken up positions along the border. Ukrainian president Volodymyr Zelensky has described this move as a precursor to an invasion.

The White House summarized the leaders’ two-hour meeting in a statement, which described how they discussed “a range of issues.” These issues included the escalation of forces along the border, broader tensions in Russo-American relations and opportunities for dialogue, and ransomware and cyberattacks between the two nations.

During the meeting, Biden expressed reservations to Putin about Russia’s role in fomenting the border crisis. He urged diplomacy and de-escalation on both sides. Also, he raised the issue of economic sanctions against Russia—which he had previously described as “high impact economic measures”—in the event of a conflict, extracting a price from Moscow if it pursued military action in Ukraine. The president indicated that the United States supported Ukrainian sovereignty and opposed Russia’s attempts to influence decisionmaking in Kiev through coercion.

For his part, Putin has expressed frustration at NATO’s eastward expansion into the historically Soviet bloc, including the proposed admission of Ukraine, which has proceeded since the Euromaidan revolution of 2014. Earlier in the week, Putin had asked for a guarantee from Biden that NATO would not be expanded further east, which he described as a “red line” for Moscow. The White House rejected this request, noting that decisions regarding NATO membership are made with the alliance as a whole.

Biden and Putin also explored areas for cooperation, most prominently the ongoing Iranian nuclear negotiations in Vienna, in which both Washington and Moscow are part of the “P5+1” signatories to the original 2015 agreement.

While no concessions were made from either side, both leaders “tasked their teams to follow up,” according to the White House statement.

The Kremlin spoke positively about the meeting. It said the discussion served as an entry point for further negotiations. “It’s hard to expect any sudden breakthroughs, but the presidents demonstrated their willingness to continue practical work and begin discussing sensitive issues that seriously concern Moscow,” Kremlin official Yuri Ushakov said after the talks had concluded.

It is expected that Biden will also hold a meeting with Zelensky in the coming days, to reassure the Ukrainian government of continued American support.