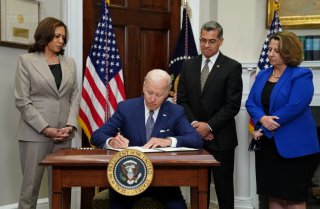 Speaking from the Roosevelt Room of the White House alongside Vice President Kamala Harris and Health and Human Services Secretary Xavier Becerra, Biden asserted that the court's decision was “extreme” and “totally wrong,” ABC News reported.

“This isn't some imagined horror. It is already happening. Just last week, it was reported that a ten-year-old girl was a rape victim—ten years old—and she was forced to have to travel out of state to Indiana to seek to terminate the pregnancy and maybe save her life,” the president continued.

According to National Public Radio, Biden’s executive order pledges to ensure the safety of abortion patients and providers and seeks to convene private lawyers to offer pro bono support to individuals who decide to cross state lines to get an abortion.

The order also directs the secretary of the Department of Health and Human Services to issue a report within the next month outlining additional actions to protect medication abortion and expand access to emergency contraception and intrauterine devices (IUDs). Moreover, the Federal Trade Commission is being directed to consider taking steps to protect the privacy of those who seek information regarding abortion services.

With Roe struck down, at least nine states have banned abortion, including Alabama, Arkansas, Mississippi, Missouri, Oklahoma, South Dakota, Texas, West Virginia, and Wisconsin. At least ten states are expected to prohibit or restrict the procedure in the coming weeks.

Biden, who has been the target of mounting pressure from Democrats and abortion rights advocates to be more forceful on the issue, said that it’s ultimately up to Congress to codify Roe into law.

“Let me be clear. While I wish it had not come to this, this is the fastest route available,” he said. “The fastest way to restore Roe is to pass a national law codifying Roe, which I will sign immediately upon its passage on my desk.”

The president also urged women to turn out in record numbers this November to elect more Democrats who support abortion rights.

“You, the women of America, you determine the outcome of this issue,” he said.

“We cannot allow an out-of-control Supreme Court working in conjunction with extremist elements in the Republican Party to take away freedoms and our personal autonomy,” he concluded.