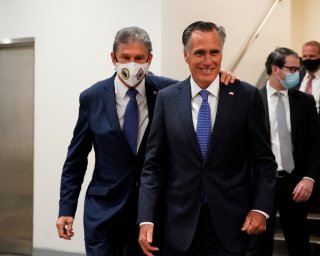 The expanded child tax credit, which sent American families direct checks every month between July and December 2021, reportedly succeeded in significantly reducing child poverty. However, after the Build Back Better legislation that would have extended the credit for another year failed in the Senate last December and the credit expired, child poverty rose again in January.

Could the credit be revived? With Sen. Joe Manchin (D-WV) still opposed to the legislation, any legislation bringing about a return of the credit would likely need to be bipartisan in nature. A new report says bipartisan talks are going on right now.

Sen. Sherrod Brown (D-OH) had been pushing for the child tax credit for years before it was enacted, while Sen. Mitt Romney (R-UT) had his own proposal for a “child allowance,” around the time of the passage of the American Rescue Plan in 2021. Now, according to Cleveland.com, the two senators are talking about a compromise that would bring the credit back.

Brown, the report said, “met with Romney to discuss Romney’s proposal to make the tax credit permanent, impose work requirements to receive it and pay for it by repurposing dollars from other social spending programs.”

The Ohio senator, per the newspaper, is optimistic about some version of the credit passing. “It’s going to happen, and I hope it’s going to happen in a bipartisan way,” Brown said this week on a press call. “My interest is getting it done for over a million Ohio families.”

It’s not clear how much support the compromise would have, as the deal is not yet completed; it would also need to pass the House of Representatives, which is closely divided as well.

President Joe Biden, in his State of the Union Address last week, urged passage of the credit, although he did so briefly, and in a part of the speech that included policy proposals that are unlikely to become law in the current Congressional environment.

“Let’s pass the Paycheck Fairness Act and paid leave,” the president said. “Raise the minimum wage to $15 an hour and extend the Child Tax Credit, so no one has to raise a family in poverty. Let’s increase Pell Grants and increase our historic support of HBCUs, and invest in what Jill—our First Lady who teaches full-time—calls America’s best-kept secret: community colleges.” The president had, the week before, held a “Day of Action” urging Americans to file a tax return in order to obtain the rest of the child tax credit, during which some Democratic senators pushed for an extension of the 2021 credit.