Can Joe Biden Forgive $50,000 in Student Loans without Congress? 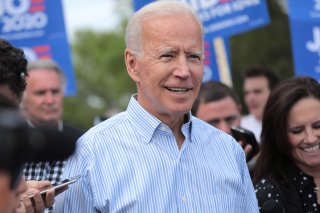 Senate Minority Leader Charles Schumer (D-N.Y.) called on President-elect Joe Biden to forgive some student debt during his time in the White House, a push that came nearly three months after he and Sen. Elizabeth Warren (D-Mass.) introduced a plan that the incoming president should cancel up to $50,000 in debt per student loan borrower next year through executive order. The measure, however, has a swirl of legal debate as experts argue over the president’s power to cancel student loan debt.

“Today we are introducing a Senate resolution outlining a bold plan for how the next president of the United States can use existing authority to deliver meaningful relief to struggling Americans,” Schumer told reporters in September when the two introduced the plan.

The initiative “simply says the person or people who wrote it think it should be a law” but “doesn’t have any binding power” and presses the president to cancel up to $50,000 in federal student loan debt per borrower in the United States through executive order. It also calls for any forgiveness to be completely tax-free.

Schumer, Warren, and other education advocates cite the Higher Education Act of 1965 to be able to implement the order, which allows the secretary of education to cancel student loan debt, though critics contest that only Congress can authorize decisions over federal spending.

Although Senate Democrats have pleaded for the widespread forgiveness of student loan debt, Biden has never agreed to forgive $50,000, but he has backed canceling a smaller amount.

What Has Joe Biden Said About Student Loan Debt Forgiveness?

“Immediate $10,000 forgiveness of student loans,” Biden said last month, referring to debtors struggling during the pandemic. “They’re having to make choices between paying their student loan and paying the rent . . . It should be done immediately.”

The president-elect’s higher education plans support the debt relief provision, as he also endorsed a House bill that pushed for the same.

But with Democratic control of the Senate still dependent upon the Georgia runoff election results that won’t be determined until January, it’s uncertain if the legislation would pass. If Republicans win the upper chamber, it’s likely that none of this will happen.

Biden has acknowledged the Warren-Schumer plan in the past, but it was somewhat rejected by the president-elect's team, as they encouraged congressional action to tackle the issue.

Although the forgiveness measure would likely aid the millions of student debt borrowers who drown in repayment, there are several problems argued by economists and policy experts with forgiving student debt to form an economic stimulus.

Would a Student Loan Forgiveness Plan Help Stimulate the Economy?

Schumer and Warren claim that student loan forgiveness would boost the state of the economy and help Black and Latino communities who are disproportionately affected by the debt burden, claims that have been disputed by many economists.

While an “entire generation has been set back,” as millennials are predicted to be poorer than their parents with loan payments postponing retirement, housing purchases and building families, canceling student loan debt would have little impact on consumer spending

Typical borrowers pay $200 to $300 per month in repayment for their loans over the course of ten, fifteen, or sometimes thirty years. Debt cancellation wouldn’t just grant a borrower, for example, a $30,000 check. Rather, it would “relieve them of their monthly interest and principal payments” and “increase their available cash by only a fraction of the total loan forgiveness,” according to a report by the Committee for a Responsible Federal Budget.

In other words, even $50,000 worth of debt relief per student loan borrower would just eliminate a small monthly payment and provide little economic improvements that likely wouldn’t outweigh the overall cost of the forgiveness plan.

The committee’s report also found that high-income households owe most of the outstanding education debt, with 56 percent held by those who pursued a graduate-level degree. So, the majority of debtors making monthly payments can actually afford them.

Can the President Actually Cancel Student Loan Debt Through an Executive Order?

Legal scholars seemed polarized on the issue, as some say that only Congress has the power to cancel student loan debt since it has the power over federal spending, while others claim that the president can, in fact, forgive student debt via executive order.

“The U.S. Constitution provides for three separate yet equal branches of government, but only Congress has the power of federal spending. Arguably, canceling student loan debt is a type of federal spending,” Forbes’ Zack Friedman wrote.

But the Higher Education Act of 1965, according to education advocates and other legal experts, grants the president the legal authority to implement a widespread student loan forgiveness program. Section 432(a) of the act enables the secretary of education “to modify, compromise, waive, or release any right, title, claim, lien, or demand, however acquired, including any equity or any right of redemption.”

“The laws that established the ability of the federal government to lend money to students to be able to go to college also put in it broad authority for the management of all of those loans, including canceling those loans,” Warren told reporters in September. “We propose to use that authority and use it across the board now.”

Lawmakers from both sides of the aisle have introduced pandemic-related relief programs to alleviate the financial stress imposed by the crises, but to date, Congress has not given the green light to any massive student debt relief bill—and it likely won’t.

It’s unlikely that Congress would hand the president unilateral authority to cancel extensive student loan debt for good for millions of Americans, considering the unchecked presidential power it would give Biden, as well as the aggregate economic costs of the order.