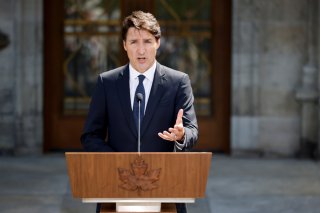 On Sunday, Canadian prime minister Justin Trudeau confirmed that Canada would hold a federal election on September 20, 2021. With the announcement of the election, Trudeau’s minority government, which has held power in Ottawa since October 2019, is slated to dissolve.

The contest was officially confirmed after Trudeau’s Sunday meeting with Canadian Governor-General Mary Simon, who has the authority to call for new elections.

In a speech regarding the election, Trudeau claimed that the vote would give Canadians a vote on the government’s actions related to the COVID-19 pandemic, including its support for mandatory vaccinations for all government workers and travelers.

“We are experiencing a historic moment,” Trudeau said in French, “and you have something to say about it. You have the right to choose the future of our country, whether to pursue our vaccination efforts or to continue our support programs.”

Trudeau’s party, the Liberal Party of Canada, is heavily favored in polls and is widely expected to win next month’s contest. The prime minister has highlighted his administration’s commitment to creating a national childcare plan, a popular initiative among many Canadians, as a reason to support the Liberals during the election. Another major voting issue is the government’s proposed vaccine mandates, which have led to heated opposition as well as strong support.

A third issue of significant concern to many Canadians is the ongoing evacuation in Kabul, whose fall to the Taliban militia on Sunday prompted massive and chaotic evacuation efforts. The Canadian government has committed to helping Afghans who supported Canada’s military mission in the country evacuate, but some have been left behind, according to Canada’s Global News.

Despite their chance to overtake the Liberal Party, Canada’s minority parties have not unanimously welcomed the decision. Erin O’Toole, leader of the Conservative Party of Canada and Canada’s official opposition leader, criticized Trudeau’s decision to hold an election during the spread of the highly contagious “Delta variant” of the COVID-19 virus. O’Toole has opposed the government’s proposed vaccination mandate.

Meanwhile, Yves-Francois Blanchet, leader of Canada’s secessionist Bloc Quebecois party, argued that if Canada’s health situation was precarious enough to require mandatory vaccinations, it would not be safe to hold an election: “If the threat is so significant that we need to impose mandatory vaccination, is it not too dangerous to go to the polls?”