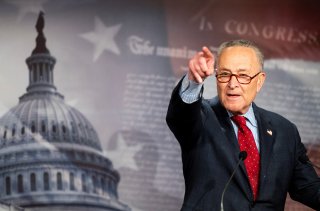 That would be the third time that Democrats use reconciliation, even though it can be used only once every fiscal year.

Democrats have already used the 2021 budget to pass President Joe Biden’s $1.9 trillion coronavirus relief package and are likely to use the fiscal 2022 reconciliation bill for the White House’s infrastructure, jobs and climate change plan.

Schumer and his staff, however, are now arguing that reconciliation can be used for a third time with the help of Section 304 of the Congressional Budget Act, pointing to the legislative text that states, “the two Houses may adopt a concurrent resolution on the budget which revises or reaffirms the concurrent resolution on the budget for such fiscal year most recently agreed to.” The section says that Congress may look to or amend previously passed reconciliation bills, a Schumer aide argued to Politico Playbook.

“Schumer wants to maximize his options to allow Senate Democrats multiple pathways to advance President Biden’s Build Back Better agenda if Senate Republicans try to obstruct or water down a bipartisan agreement,” the Schumer aide said.

No final decision has been made on the legislative strategy, though Democrats and the White House have heavily acknowledged that massive party priorities will likely not get sixty votes in the Senate, which is the number of votes needed for a bill to overcome a filibuster.

“After the Republicans offered to support only something that was [one-third] the size of President Joe Biden’s American Rescue Plan, he and his advisers concluded that trying to win Republican support for his major initiatives would not work,” Rogers Smith, a political science professor at the University of Pennsylvania, said. “The Biden administration believes that their major legislative initiatives are so urgent that they cannot wait for prolonged partisan negotiations, and that those initiatives cannot be sharply scaled down and still be effective in meeting the country’s needs.”

J. Russell Muirhead, a democracy and politics professor at Dartmouth College, noted, “The problem is not that the Republicans are intransigent, nor that the Democrats are too extreme. The problem is the razor-thin 50-50 split that leaves each party thinking it can win a majority of seats in the 2022 election. Under conditions of such intense competition, the minority has no incentive to give a legislative victory to the majority. Until one party or the other succeeds at building a durable majority, compromise and bipartisan legislation will be scarce, which is why the filibuster will make it very difficult for the Senate to function.”

Not a single Republican voted to support the Democrats’ $1.9 trillion coronavirus relief bill.

And although Biden dubbed himself as the “unity” candidate seeking bipartisan support in his legislative endeavors, Smith noted that “if their major bills produce good results for the country,” then Democrats could see success in next year’s midterm elections.

“The administration’s calculation is that if their major bills produce good results for the country, Democrats will still fare better in 2022, despite not having worked with Republicans, than if they tried to do so and ended up perpetuating the paralysis that polarization has produced on many issues,” Smith said.

Democrats are also facing hurdles in keeping party members unified, as more moderate party members will not stand behind the push to end the legislative filibuster, a measure that would require support from all fifty Democrats in the upper chamber.

“No matter how genial and conciliatory he is, even President Biden will not be able to build a lasting bipartisan coalition in today’s Senate. Repeated use of reconciliation is telling us that the parties cannot come together—and either the Senate will kill the filibuster, or the filibuster will kill the Senate,” Muirhead said.

Schumer told reporters last week that he believes “big, bold action is an imperative. We must get that done. And we prefer our Republican colleagues to work with us on these things. Many of the things I mentioned are bipartisan in the sense that a majority of Republicans support them.”

“If they don't, our caucus will come together and we will discuss the best way to produce that big, bold action. And as I've said before, everything, everything is on the table,” Schumer added.