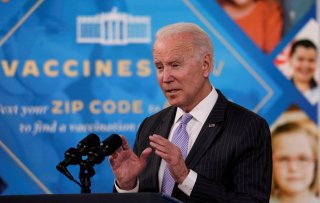 A new survey indicates that the expiration of the enhanced child tax credit may have had an impact on President Joe Biden’s approval rating among parents.

Per HuffPost, Biden’s approval rating was 4 percent higher among parents when the monthly payments from the enhanced credits started last July, according to researchers at Fighting Chance for Families Action, a project of the liberal groups Data for Progress and Groundwork Collaborative.

But when the enhanced credit funds abruptly ended in January due to the stalling of Build Back Better, Biden’s approval rating was found to have slightly reversed course.

“While not massive, these effects are clear at the margins—which is extremely important in politics,” Fighting Chance for Families Action researchers Colin McAuliffe, Ahmad Ali, and Ethan Winter wrote in their report.

“A four-point boost in approval among parents, like the one the payments may have initially provided, would amount to less than one point overall, since most voters aren’t looking after minor children,” HuffPost wrote. “But parents of school-age kids have been an especially important constituency in national politics for the past six months.”

Not long after the payments stopped, several studies and polls began to show the disturbing consequences of taking away the monthly checks that millions of parents had come to rely on.

According to Business Insider, research from the Center on Poverty and Social Policy at Columbia University revealed that 3.4 million more children lived in poverty in February compared to last December.

“Monthly poverty remained elevated in February 2022, with a 14.4 percent poverty rate for the total U.S. population,” the researchers wrote. “This is a slight decrease from 14.7 percent in January 2022, but a continuation of the spike from the December 2021 monthly poverty rate of 12.5 percent.”

Putting Parents in a Bind

A separate survey conducted by ParentsTogether Action found that about 20 percent of parents admitted that since the monthly payments came to a halt, they haven’t been able to afford enough food. Moreover, 57 percent of respondents claimed that it will be more difficult for them to meet their family’s basic needs, and 22 percent said that they will no longer be able to meet their family’s basic needs.

“After half a year of child tax credit payments, it is clear that American parents have used this money to pay for the basic necessities families need: food, housing, and childcare,” Bethany Robertson, co-director of ParentsTogether, said in a statement.

Another analysis by the Center on Budget and Policy Priorities warned that nearly ten million children could potentially fall back into poverty without the enhanced credits.