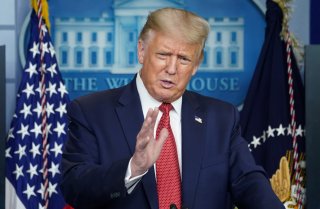 No matter the nation’s need, the campaigning in Washington never stops. Cynical positioning has typified postures on both sides of the aisle, even as the economic help offered by last spring’s CARES Act runs its course. Members of Congress—both houses and both parties—have refused compromise on a bill to sustain support for the economy, because, it seems, no one will part with any aspect of his or her particular agenda. In response, President Donald Trump has issued four executive orders, out of what the White House describes as concern and frustration but also as a clear re-election campaign ploy.

Three of Trump’s orders deal with expiring aspects of the CARES Act. Because the Act’s extra $600 in weekly unemployment insurance payments expired on July 31, the president has made provision for the states to offer $400 in extra weekly insurance payments, 75 percent paid by the federal government, the remaining 25 percent left to the state. Because the CARES Act’s deferment of payments on some student loans will expire at the end of September, Trump has ordered an extension to the end of the year. A third executive order responds to the July 24 expiration of the moratorium on evictions. It instructs the Departments of Housing and Urban Development and Health and Human Services as well as the Center for Disease Control and Prevention to assist those who struggle to meet rent obligations.

The fourth executive order, and the most controversial of the lot, reflects not at all on the CARES Act. It defers until year-end payroll taxes on Americans earning $4,000 or less in a biweekly paycheck. The White House has offered nothing to respond to the August 8 expiration of the Payroll Protection Program (PPP) that offered loans to small businesses that were forgivable if the funds went to maintain payrolls, except that presumably the payroll relief will benefit employers as well as workers.

Trump took executive action because Congress refused to compromise. Even though lawmakers presented very different bills, with Republicans seeking about $1 trillion in measures and Democrats $3 trillion, there was hope that legislation would emerge. Things were almost as far apart when Congress began what resulted in the timely CARES legislation last March. But instead of compromise for which Congressional deliberation is presumably designed, the two sides hardened against each other. Republicans refused to include aspects of the Democratic bill that they saw as peripheral to the economy’s immediate needs, accusing that bill’s supporters of using the coronavirus crisis to advance a more general agenda. Democrats refused to vote in favor of any legislation that failed to include those broader aspects. Which party is less worthy in this will remain a matter for historians to decide, but citizens today can feel secure in the knowledge that neither party showed itself ready to yield for the sake of a clear national emergency.

Of the president’s responses to this impasse, the payroll tax deferment has received the most criticism. The negative reaction may partially reflect that it, unlike the other three orders, does not extend an expiring aspect of the CARES Act. Mostly, it is politics. Trump has long pressed for payroll tax relief. No doubt he and his economic advisors see it as a way to encourage job growth at the lower end of the income distribution by making it more rewarding for people to work and cheaper for employers to hire them.

His executive order, of course, falls far short of this objective. He cannot change the payroll tax legislation without an act of Congress. All he has done with this executive order is defer the tax obligation, which still accrues. This circumstance has led critics of this order to claim that the action may not actually put more money in people’s pockets, that employers will continue to withhold in anticipation of the ultimate demand for payment. Trump, in response to this valid criticism, has promised to press for a change in the legislation if he is re-elected, but that is a very different matter than this executive order.

Other criticisms of the payroll tax order have different levels of relevance. The complaint that it jeopardizes the Social Security Trust Fund might be valid were Trump to win re-election and press for a change in payroll tax legislation, but in response to the executive order, it is nonsense. The tax obligation remains and both workers and employers will have to pay into the Trust Fund eventually. A second criticism holds that payroll tax relief helps the wrong people. It is the unemployed who need help most, these critics point out, and those facing payroll taxes have jobs. As an answer to this concern, the White House has pointed to its other order on supplemental unemployment insurance payments. Then there are those who argue that even if the payroll tax deferment puts money in workers’ pockets, it will come in gradually, and the economy needs an immediate boost. These critics would prefer a repeat of the CARES Act’s broad-based distribution of $1,200 to each low-income American. There is debate on how effective that measure was, but the White House clearly has no ready answer to this criticism.

No doubt some judge will block or try to block these executive orders. That has been the pattern throughout the Trump administration’s efforts to use what his predecessor, Barack Obama, referred to as his “pen” and his “phone.” If past experience is any guide, then the president will likely get his way on this. How much his four orders will help the economy is a less certain matter. Apart from economics, this dance has given Trump a platform to promise relief on the biggest tax facing low-income Americans and a campaign issue that he did not have a week ago.