Don't Expect Mike Pence to Try and Save Donald Trump 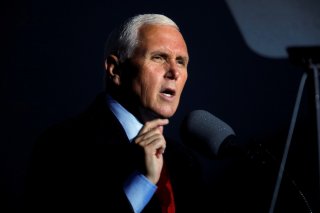 Under current law, the vice president, or the president of the Senate, must preside over the certification of the presidential election results.

And on Jan. 6, Vice President Mike Pence, one of President Donald Trump’s most ardent loyalists, will enlist in a potent duty to oversee the joint session when Congress formally counts the electoral college votes and recognizes Joe Biden the winner of the 2020 presidential election.

But despite Biden’s clear victory, Trump and close conservative allies continue to overturn the election results with baseless claims of voter fraud. In the team’s latest attempt, Rep. Louie Gohmert (R-Texas) and a group of Arizona Republicans filed suit against Pence in federal court in Texas on Monday, asking the court to grant the vice president the unilateral authority to effectively accept or reject any electoral votes. In theory, if the federal judge rules in favor of Gohmert’s request, it would hand Pence massive powers to identify whether to deny slates of electors from specific states—as conservatives are laser-focused on rejecting the elector votes in key battleground states like Arizona, Georgia, Michigan, Pennsylvania and Wisconsin that determined the outcome of the election.

“Vice-President Pence … is subject solely to the requirements of the Twelfth Amendment and may exercise the exclusive authority and sole discretion in determining which electoral votes to count for a given state,” the complaint read.

Election law experts, however, expect the lawsuit to collapse.

“Pence’s constitutional role is to ‘open’ the certificates. That’s it. Not to certify not even technically to count. He has no way even to purport to change the count. It’d be like saying the Oscar presenters get to decide who wins Best Picture,” former United States Attorney Harry Litman tweeted Tuesday.

“A federal judge is not going to sign a judgement saying the vice president can overturn the election.” Raffi Melkonian, an appellate lawyer at Wright, Close & Barger in Houston, tweeted.

But according to a motion made public Tuesday that attempted to expedite the case, the GOP-lep suit was only filed after Pence and the plaintiffs could not reach any kind of agreement during private discussions.

“Plaintiffs’ counsel made a meaningful attempt to resolve the underlying legal issues by agreement, including advising the Vice President’s counsel that Plaintiffs intended to seek immediate injunctive relief in the event the parties did not agree,” the motion read. “Those discussions were not successful in reaching an agreement and this lawsuit was filed.”

Pence’s move to separate from the Republican pull to overturn the election results marks a significant break from the commander-in-chief, who’s made it his sole priority to retain power in Washington during his last few weeks in the Oval Office.

During Congress’ joint session next week, federal law requires Pence to physically open the envelopes holding the votes of electors from each of the states, which is then orderly announced. Lawmakers from either chamber can object to a state’s results—which will likely happen as several House Republicans, along with the first, and so far the only, GOP Senator Josh Hawley (Mo.), stated their objections to the election results. If both House and Senate members challenge the electoral votes on Jan. 6, the initiative sparks a floor debate and vote within each chamber. But with Democratic control of the House and multiple Senate Republicans coming forward to congratulate Biden on his win, the president will likely see another brutal election defeat.

Pence has not made public statements regarding the joint session, though he did argue “We’re going to keep fighting until every illegal vote is thrown out” at a Georgia rally earlier this month while campaigning for Sens. Kelly Loeffler and David Perdue.

Trump has supposedly bashed the vice president for his lack of participation in the fight to reverse the election, according to CNN.

Republicans are trying to carve an opening for another Trump term through Pence, one that will likely not work.

With Pence in the GOP pool for 2024 presidential candidates, the vice president may be keeping quiet to avoid any political harm or damage to his future White House bid, as top Republican lawmakers, including Senate Majority Leader Mitch McConnell (KY) have cautioned colleagues within the party to refrain from contesting the election results on Jan. 6. The vice president must decide whether to stay on Trump and the MAGA voter base’s good side and join the force in objecting to the results that would guarantee firm campaign support in four years, or proceed with election protocol and declare Biden the winner.