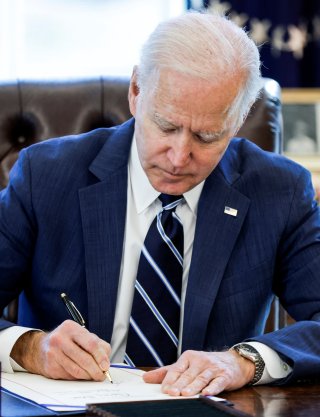 As the pandemic continued last year, unemployment extensions allowed some twenty-five million Americans to continue collecting unemployment benefits. Many of those individuals likely counted on the money to get them through difficult times, and even those who are back on their feet could soon get a very unwelcome surprise.

More specifically, they may face a larger-than-expected tax bill when filing their 2021 returns.

Unlike unemployment benefits that were paid to Americans in 2020, benefits from 2021 will be subject to federal income tax. Recipients who didn't have tax withheld—or didn't have enough withheld—last year may owe money to the Internal Revenue Service (IRS), or at the very least will receive a small refund.

The American Rescue Plan Act, which was passed by Congress last March, waived federal taxes on some unemployment benefits that were collected in 2020. This assistance covered unemployment benefits up to $10,200 for households that made less than $150,000. Because Congress hasn't approved a similar tax break this year, those expecting a refund may not receive one and could even wind up owing taxes.

While CNBC suggested that Congress could still pass legislation during the tax season that would offer such a tax break to unemployment recipients, it isn't certain that will happen.

As the U.S. economy and job market have rebounded, claims for unemployment benefits have fallen to pre-pandemic levels. In addition, the national unemployment rate is now at 3.9 percent—the lowest since February 2020. As a result, there might be little incentive to waive taxes on the benefits.

However, there are a few reasons why Congress might act. First, unemployment is 3.6 million jobs below its pre-pandemic baseline, and nearly 2.3 million people have simply left the workforce. Additionally, with inflation at a three-decade high, increased prices are eating into wages. Given those factors, it is possible that some lawmakers may see the need to throw Americans a lifeline.

There could be some good news for those who already paid taxes on unemployment benefits that they collected in 2020 and 2021. The IRS has announced that it will continue to process refunds for those individuals. As of December 28, the IRS already issued tax refunds worth $14.5 billion to more than 11.8 million households.