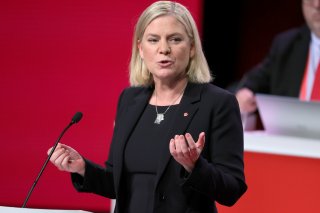 Magdalena Andersson, Sweden’s first female prime minister, resigned the position within hours of her appointment last week after her coalition government fell apart—but quickly returned to the position after a second vote on Monday.

Andersson, the leader of Sweden’s center-left Social Democratic Party, had initially received the support of the country’s left-wing Green Party, putting her over the 175-seat majority needed to form a government. However, after the coalition’s budget bill failed in an open session of parliament, the Green Party withdrew from Andersson’s coalition, leading to her resignation. After her resignation, Andersson indicated that she hoped to continue in the position of prime minister at the head of a minority single-party government composed entirely of the country’s Social Democrats with “confidence and supply” from other liberal parties.

The procedural rules of the Riksdag, Sweden’s parliament, state that a nominated prime minister must be voted against by a majority of the chamber to not be selected. Although they declined to take part in the government, some Green Party members indicated that they would support Andersson in a second confirmation vote, while the other liberal parties that had formed the first government—the country’s Left Party and Centre Party—either voiced their support or announced that they would abstain from voting against her, making her return to the prime ministership all but guaranteed.

The Swedish budget proposal, which typically lays out the government’s spending priorities for the next year, was an issue of contention between the liberal and conservative blocs in the Riksdag. The proposal submitted by the liberal governing coalition was ultimately voted down 154–143 in favor of the budget proposed by the conservative bloc, which contains the Sweden Democrats, a right-wing party with prior links to neo-Nazism.

Although the conservative budget included larger tax cuts and left out a proposed 74 billion kronor ($8 billion USD) social services spending package, it was otherwise not substantially different from the liberal budget, and Andersson had indicated that she was willing to govern with it. However, the Green Party’s leaders cited the conservative budget’s approval as the principal factor in their decision to leave the coalition, arguing that they would not participate in a government obliged to implement the proposals of the Sweden Democrats.

Andersson’s accession to the prime ministership marked the first time the country has had a female head of government. It was the last country in Scandinavia to achieve that milestone. Andersson had earlier served in the Riksdag since 2014 and was appointed minister of finance under her predecessor, Prime Minister Stefan Lofven.

The country’s next general election is scheduled to take place on Sept. 11, 2022.