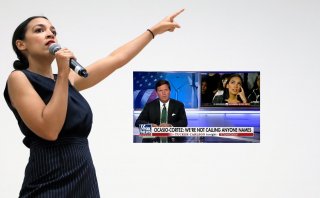 “Nice to see you, Alexandria,” Fox News host Tucker Carlson responds. The two meet center stage—without a handshake since that’s been outdated for the last four years—before a small crowd chiming with claps and cheers—an “AOC” chant even bursts from the crowd for a few seconds before security tamed the excitement. It’s the first time Ocasio-Cortez and Carlson have made a public appearance together.

After waving and pointing to faces in the audience, Ocasio-Cortez and Carlson walk to their respective podiums. Ocasio-Cortez immediately grabs a pen left on her podium and jots down notes. Carlson organizes his podium workspace and takes a prominent look at the faces in front of him—since he’s normally used to a cameraman, directors and producers monitoring his nightly segment. A live crowd is unusual for him.

The two political leaders have polarized views—one is seen as a progressive socialist, whose beliefs are “really diet-Communism” and the other is an echo of “Trumpism,” who champions anti-immigration, anti-free trade and populism.

Over the last few months, there have been murmurs about Carlson running for president in 2024, as he would be a “continuation of what Donald Trump has started,” shaping a climate that’s tired of career politicians and wants someone who’s capable of answering the tough questions. Carlson’s television personality has paved his show to be the most-watched cable news program in history, according to reports released in June.

At the other end of the political spectrum lies Ocasio-Cortez—the youngest woman elected into Congress and a figure who’s been speculated to run if Joe Biden loses or does not run for a second term provided he wins in November. Democratic strategists don’t think Congress is the end for Ocasio-Cortez, as she’s “one of the bright lights for the Democrats in terms of speaking to young people in particular about policies in a way that is something that young people and other people can relate to.”

In 2024, if Ocasio-Cortez and Carlson both run for president and receive their respective party’s nomination, campaign trails and debates would be filled with extremism—from the Republicans and the Democrats—and a rapid-fire of brutal commentary about the other’s policies and persona. Ocasio-Cortez has called Carlson a “white supremacist sympathizer” after the Fox News host described her district as being “filled with garbage” since it’s “one of the least American districts in the country.” If the two went head-to-head on a debate stage or in a race for the presidency in 2024, then both would shoot and take vicious jabs—perhaps even more so than President Donald Trump.

Some key issues that Ocasio-Cortez and Carlson disagree on are climate change, immigration and health care.

The congresswoman has recently introduced the “Green New Deal” that is an ambitious climate change proposal that aims to have zero carbon emissions and no use of fossil fuels within twelve years.

“No fossil fuels would mean no coal, no oil, and no natural gas. And that would mean no cars and no airplanes. It would mean shutting down the single most vibrant part of the entire U.S. economy, which is the energy sector. It would mean putting at least six million Americans out of work immediately,” Carlson said on Tucker Carlson Tonight.

“What’s so interesting about this is that the party of science somehow forgot to consult actual scientists about their plan. Talk to someone who studies energy and see for yourself. We are nowhere near being able to do any of this,” he added.

But, Ocasio-Cortez insists that the deal would create millions of jobs in green industries and in new forms of energy systems. The legislation also works with farmers “to eliminate pollution and greenhouse gas emissions” and builds “charging stations everywhere” to reduce emissions and boost electric car manufacturing.

Carlson, along with the GOP, believes the Deal is not economically and logistically feasible

Carlson has also echoed most of Trump’s beliefs on immigration and health care.

"The American piñata has been getting pummeled for decades and now it has finally come apart," the conservative host said on his nightly segment. "Our national wealth is up for grabs by whomever gets here first, and they are coming." Carlson has been an advocate of the U.S.-Mexico border wall, an anti-immigration initiative that Ocasio-Cortez slammed the president for creating since it defies “American tradition” and doesn’t provide care for women and children seeking refuge to the United States.

In terms of health care, Ocasio-Cortez backs Medicare For All, an expensive plan that would provide health care to every citizen without out-of-pocket expenses. The congresswoman would likely make this a key provision of her presidential campaign—similar to that of Sen. Bernie Sanders (I-Vt.)—despite the overall tax increase it would impose on all Americans.

“Medicare for all is actual socialism. For real, socialism . . . If it becomes law, it would amount to the largest expansion of the federal government since the Second World War, by far,” Carlson said.

Despite Republican criticism, Ocasio-Cortez insists Medicare For All “is actually much cheaper than the current system” and “is not a pipe dream.”

It’s hard to believe the two could agree on anything, especially on a topic that doesn’t strictly align with Trump’s beliefs.

However, Ocasio-Cortez and Carlson both condemned Trump’s actions to kill Iran’s Maj. Gen. Qassim Suleimani since they both don’t want America to engage in a full-blown war with Iran.

“No one in Washington is in the mood for big-picture questions right now,” Carlson argued when the decision was made. “Questions like: Is Iran really the greatest threat we face? And who’s actually benefiting from this? And why are we continuing to ignore the decline of our own country in favor of jumping into another pointless quagmire, from which there’s no obvious exit?”

“Last night the president engaged in what is widely being recognized as an act of war against Iran, one that now risks the lives of millions of innocent people,” Ocasio-Cortez tweeted just before Carlson’s remarks on Fox News. “The cheerleaders of war, removed from its true cost, will gladly convince you that up is down—just as they did in Iraq in '03 . . .  The same folks selling us Iraq and selling us this latest provocation of violence. We cannot repeat this cycle."

It’s no question that Ocasio-Cortez would oppose Trump’s decision, but Carlson’s bold statements against Washington’s leadership rings the alarm for the Trump administration, as the television host has served as an ally to the president.

Although it’s difficult to tell if Ocasio-Cortez or Carlson would rally enough support to sustain an entire presidential campaign, the outcome of the upcoming election will likely indicate which types of politicians will run in 2024 and how the political climate will shift depending on who takes over the White House come November.